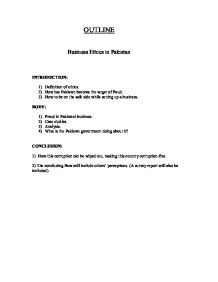 OUTLINE Business Ethics in Pakistan INTRODUCTION: 1) Definition of ethics. 2) How has Pakistan become the target of fraud. 3) How to be on the safe side while setting up a business. BODY: 1) Fraud in Pakistani business. 2) Case studies. 3) Analysis. 4) What is the Pakistan government doing about it? CONCLUSION: 1) How this corruption can be wiped out, making this country corruption-free 2) The concluding Para will include others' perceptions. (A survey report will also be included) CERTIFICATE This is to certify that BILAL KHALID has completed this Extended Essay under my supervision. The work is based on his own findings and is of satisfactory quality. ( subject supervisor) ----------------------- DATE --------------------- CERTIFICATE I, BILAL KHALID, have completed this Extended Essay with help from my subject supervisor SIR AMIN ------------------ ------------------ DATE ----------------- What are ethics? Do they exist in our society today, or are they just claims of good governance? Ethics is that fabric which even through burning will not ruin its essence of truth, but when that fabric turns out to be a swindle and a fraud itself, it will not only ruin itself but also its name and popularity. Thus, our nation, that was once known for its legitimacy and truthfulness, has been exposed in front of the world as unethical and fraudulent, and we can only hold our leaders responsible, for these corrupt people certainly have ruined the moral fabric of our nation. What is fraud? `Fraud` is deception, criminal in nature, and a misrepresentation of facts to gain an unfair advantage. It is about making claims and not fulfilling what is expected based on one's obligations. Unless and until we do not protest these false claims, our nation's people will carry on circumventing the laws to suit their nefarious purpose. However, is fraud just about corporations, institutions and governments? Fraud is about us individuals caught up in the rat race of keeping up with the Joneses, all the time trying to be superior, and trampling ...read more.

were yet to introduce a system which could check this menace. He lamented that time and again exporters had pleaded with the government that the old law of excise duty i.e. clearance of goods on Form AR-2 and AR-3 be adopted which did not involve any monetary transaction but this simple law was not acceptable to the CBR who were devising another method called "DTRE" which was extremely complicated and had been undergoing change every now and then. Rizvi further said that till such time, the rules of sales tax collection were simplified and exports were not made zero rated, neither investment nor exports would grow. He said that CBR figures showed that it had refunded Rs7 billion in 2001 and Rs10 billion in 2002 against such bogus sales tax refund claims. This crime of denying billions of rupees to the exchequer, he said, was being carried out by a cartel of corrupt businessmen and sales tax officers. "Without changing the system and taking strict action, against such elements the country will continue to suffer on account of huge revenue loss", he added." Case study # 3 A Gang Involved In Issuing Fake Invoices Busted The Collectorate of Sales Tax, Faisalabad has recently busted a gang which was indulging in the issuance of fake invoices for a long time, undetected. Three units namely M/s. Al-Rashid Fabrics, M/s M.H. Textile registered as manufacturer-cum-wholesaler did not have any manufacturing facility at all. M/s A.R.K, was registered with the Multan Collectorate, but however, their records including two other units was found lying in one office in Faisalabad which showed that they were paying a nominal amount of sales tax against transactions of huge amounts of money. They were also issuing sales tax invoices against fake purchases without actually depositing sales tax into the government exchequer. The investigation has further revealed that they used to issue sales tax invoices to various registered persons through brokers in the market against receipt of a certain percentage ( reportedly 20 to 25%) ...read more.

Side by side, the state gets its due share of revenue from business and industry through the collection of legitimate taxes, and reinvests that money into the state by providing civic facilities to its citizens and retaining a tidy sum in the treasury in the event of a rainy day. The scenario is good. Business booms, the economy prospers, cities are well maintained and citizens are well fed and happy. On the dark side, corruption filters into societies that are not secure. The concept of 'you scratch my back and I'll scratch yours' seeps into a society when a state is not well governed; when laws are disregarded or circumvented, by both the governors and the governed; when people in powerful positions use their clout dishonestly; for the greater material and financial gain of a few people in positions of power. If the functionaries of a government do not do their jobs diligently and give their personal interest prime importance over and above the national interest, the moral fibre of a state begins to erode and then corruption begins to seep into all levels of society insidiously and irreparably. The common man follows suit and employs dishonest and fraudulent means to further his objectives. Then it becomes 'every man for himself' and gradually over a period of time, this parallel system becomes the norm and the honest, law-abiding system becomes the exception. Tax evaders should be mercilessly penalized, corrupt tax officers should be stripped of their jobs, salaries should be substantially increased to quell the attraction for dishonest money, stringent measures should be employed to root out bribery and corruption starting at the highest level. When the citizens realize that their government means business, they will tread warily and cooperate with the new process. Then only can a welcome change be injected into a rotten system, to stem it. Discipline will then automatically play its role and the danger of anarchy will be reversed. ...read more.