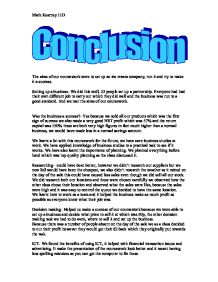 The aims of our coursework were to set up an ice cream company, run it and try to make it a success.

Setting up a business- We did this well, 23 people set up a partnership. Everyone had had their own different job to carry out which they did well and the business was run to a good standard. And we met the aims of our coursework.

Was the business a success?- Yes because we sold all our products which was the first sign of success we also made a very good NET profit which was 57% and the return capital was 150% these are both very high figures in fact much higher than a normal business, we would have made less in a normal savings account.

We learnt a lot with this coursework for the future, we have seen business studies at work. We have applied knowledge of business studies to a practical task to see if it works. We have also learnt the importance of planning. We planned everything before hand which was top quality planning as the class discussed it.

We did research both our locations and these were chosen carefully we observed how the other class chose their location and observed what the sales were like, because the sales were high and it was easy to control the queue we decided to have the same location.

We learnt how to work as a team and it helped the business make as much profit as possible as everyone knew what their job was.

Decision making- Helped us make a success of our coursework because we were able to set up a business and decide what price to sell it at which was 50p, the other decision making task we had to do were, where to sell it and set up the business.

Because there was a number of people absent on the day of the sale we as a class decided to cut their profit however they would get their £2 back which they originally put towards the task.

ICT- We found the benefits of using ICT, it helped with financial transaction issues and advertising. It make the presentation of the coursework look better and it meant having less spelling mistakes as you can get the computer to fix these.

Improvements – It could have been done at a different time of the year because the 5th, 6th and 7th years had all left the school, that meant 700 people out of 1200 were their during the sale. We could have sold more products which meant more profit.

The weather could have been researched better as it rained however no-one checked this but even so it cannot be guaranteed that’s really all the changes we could have made.

I really enjoyed the chance to see and understand what it took to set up a business, obviously this is on a far smaller scale than a real life business but it was really good to make the decisions and make a profit and understand the kind of things you need to do to make your business a success.

It was so good I who really consider doing ait again only on a larger scale when there’s more people in the school.