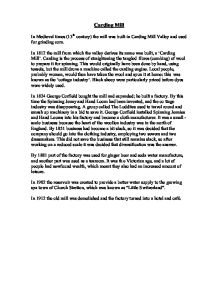 Carding Mill In Medieval times (13th century) the mill was built in Carding Mill Valley and used for grinding corn. In 1812 the mill from which the valley derives its name was built, a 'Carding Mill'. Carding is the process of straightening the tangled fibres (combing) of wool to prepare it for spinning. This would originally have been done by hand, using teasels, but the mill drove a machine called the carding engine. ...read more.

By this time the Spinning Jenny and Hand Loom had been invented, and the cottage industry was disappearing. A group called The Luddites used to travel round and smash up machinery in a bid to save it. George Corfield installed Spinning Jennies and Hand Looms into his factory and became a cloth manufacturer. It was a small- scale business because the heart of the woollen industry was in the north of England. ...read more.

It was the Victorian age, and a lot of people had newfound wealth, which meant they also had an increased amount of leisure. In 1902 the reservoir was created to provide a better water supply to the growing spa town of Church Stretton, which was known as "Little Switzerland". In 1912 the old mill was demolished and the factory turned into a hotel and caf�. This is a picture of Carding Mill (now) This is a picture of the shop (on the left) and the tearoom (on the left) (now) ...read more.