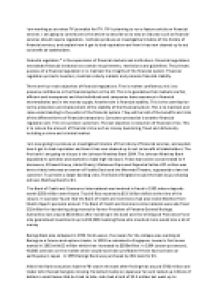 Describe why an industry such as nancial services should require regulation.

The first bank I am going to discuss is the Johnson Matthey Bank 1984. The Johnson Matthey Bank expanded its activities and started to make high risk loans. These loans were concentrated to 4 borrowers, El Saeed Group, Abdul Shamji, Mahmoud Sipra and Rajendra Sethia. £21 million was lent to Abdul who was an owner of Puddle Dock and the Mermaid Theatre, supposedly a low risk customer. To prevent a larger banking crisis, The Bank of England recued the bank by purchasing Johnson Matthey Bank for £1. The Bank of Credit and Commerce International was involved in fraud in 1991 where deposits worth £250 million were frozen. Touché Ross reported a £5.6 billion deficit at the time of the closure. It was later found that the Bank of Credit and Commerce had also stolen £1billion from Sheikh Zayed’s personal account. ...read more.

He betted mainly on Japanese Yen and racked up millions of dollars in small losses that he tried to hide. John had a limit of $2.5 million but went up to $7.5billion due to lack of checking. John Rusnak now has served over seven years in prison due to his actions. Last is the Bernard Madoff ?Ponzi? scheme. A well-respected financier, Madoff convinced thousands of investors to hand over their savings, falsely promising consistent profits in return. Madoff used a Ponzi scheme, which lures investors in by guaranteeing unusually high returns. Things began to deteriorate after clients requested a total of $7 billion back in returns but Madoff only had $200 million to $300 million left to give. He later on handed himself in and got 150 years in prison. In conclusion, these problems highlighted in the banks above have affected the way we do things today. There are now many laws and regulations in order to make sure this doesn?t happen again and customers are closely investigated before granting them any services. ...read more.