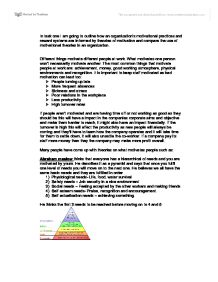 In task one I am going to outline how an organization's motivational practices and reward systems are informed by theories of motivation and compare the use of motivational theories in an organization. Different things motivate different people at work. What motivates one person won't necessarily motivate another. The most common things that motivate people at work are: achievement, money, good working atmosphere, physical environments and recognition. It is important to keep staff motivated as bad motivation can lead too: > People turning up late > More frequent absences > Sickness and stress > Poor relations in the workplace > Less productivity > High turnover rates If people aren't motivated and are having time off or not working as good as they should be this will have a impact in the companies corporate aims and objective and make them harder to reach, it might also have an impact financially. If the turnover is high this will affect the productivity as new people will always be coming and they'll have to learn how the company operates and it will take time for them to settle down, it will also unsettle the co-worker. If a company pay its staff more money then they the company may make more profit overall. ...read more.

Theory Y- Employees want to do well and believe work is satisfying and rewarding they want responsibility and challenges and don't need any punishment. It's up to managers to meet the objectives of the employees with that of the business. David McClelland believes everyone needs 3 different types of motivation: > Need for achievement - they need to be challenged, success and feedback > Need for authority and power - They need to have an influence on others they need to take the lead; they want to make an impact. > Need for affiliation - They want friendly relationship and be accepted as part of the team. He believes every person has different levels of needs for the above but most people have a mix of all three. Reward systems Reward systems are very good for motivation; you can reward people in different ways like: Bonuses-a bonus consists of extra money for employees. Lots of companies give out bonuses to motivate its work force. Often this depends on how hard the employ has worked so if they work hard there is an incentive that they will get more money. ...read more.

It can reduce - * Boredom * Social problems/ problems between employees * Mental and physical strain. Most employees relish responsibility so Worcester College of technology let them set there own paces and reach new goals all the time. This relates to Douglas McGregor theory that some people want to do well in the workplace and will get more satisfaction if they feel they are achieving something. Iwould say the college supports this theory because they try to reward each employee in the most appropriate way especially if they are highly achieving as like Victor Vroom's theory he says employees can be motivated by getting rewarded for completing tasks to a high standard and the employee will feel a sense of achievement. Also in there hierarchical there is chance to move up the ladder. Worcester technology does not believe in Fredrick W Taylor's theory that money is the only motivator for employee; it concentrates on other reward systems not just money. The College agrees with Abraham Maslow's theory of Hierarchy of Needs. Worcester College of technology also thinks employees are motivated by different things so the college tries to motivate different employees in different ways. An example of this may be an employee who is motivated by responsibility and career progression will have different expectations then those who are only motive by money. ...read more.