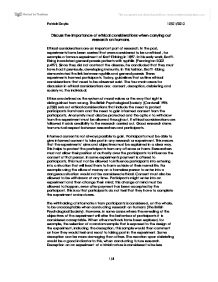 Discuss the importance of ethical considerations when carrying out research on humans.

Participants were told that the study would look at the relationship of punishment in learning, and that one person would be the teacher, and the other would be the learner (a confederate), and that these roles would be determined by a random drawing. The learner was then strapped into a chair, and electrodes are attached to their arm. It was explained to both the teacher and the learner that the electrodes were attached to an electric shock generator, and that shocks would serve as punishment for incorrect answers. The experimenter then states that the shocks will be painful, but that they will not cause any permanent tissue damage. The teacher and learner were then divided into separate rooms. The learners were in fact stooges and did not feel any pain. This was the main deception that was taking place. This experiment was seen to be unethical because of the many deceptions that took place. The participants were lied to from the beginning, concerning the objectives of the experiment and the pain they were inflicting. Then the researchers used their position of authority to oppress the participants into an action that they would not have normally done. ...read more.

However the social responsibility that Bandura had to illustrate was the undeniable fact that young children not only observe but retain violent behaviour that they see. Psychologists such as Milgrim have an ethical responsibility to society as a whole. It could be argued that he would not be fulfilling that responsibility if he did not carry out such research as he did. Elliot Aronson (1995) suggests that psychologists face a dilemma when this wider responsibility to society conflicts with the obligations to individuals. This issue is greater the more important the issue is to society. The more important the study and the more potential benefit the study has to society the more likely it is that the participants involved will experience discomfort. It is apparent that as time has gone on ethical considerations have become more important to researchers. The considerations allow for research to gain in credibility and robustness when standing up to critics. The guidelines set out by The British Psychological Society have meant that researchers can easily gain access to the considerations that they need to adhere to in order to conduct ethical research. The importance that these guidelines have for research is evidenced in the protection of participants and the credibility of modern research. Without the ethics behind research it would be hard to gain participant consent for research to be carried out. ...read more.