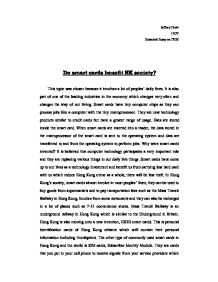 Jeffrey Chow 13GY Extended Essay on ITGS Do smart cards benefit HK society? This topic was chosen because it involves a lot of peoples' daily lives. It is also part of one of the leading industries in the economy which changes very often and changes the way of our living. Smart cards have tiny computer chips as they can process jobs like a computer with the tiny microprocessor. They are new technology products similar to credit cards but have a greater range of usage. Data are stored inside the smart card. When smart cards are inserted into a reader, the data stored in the microprocessor of the smart card is sent to the operating system and data are transferred to and from the operating system to perform jobs. Why were smart cards invented? It is believed that computer technology participates a very important role and they are replacing various things in our daily live things. Smart cards have come up to our lives as a technology investment and benefit us from carrying less hard cash with us which reduce Hong Kong crime as a whole, there will be less theft. In Hong Kong's society, smart cards almost involve in most peoples' lives, they can be used to buy goods from supermarkets and to pay transportation fees such as the Mass Transit Railway in Hong Kong, lunches from some restaurants and they can also be recharged in a lot of places such as 7-11 convenience stores. Mass Transit Railway is an underground railway in Hong Kong which is similar to the Underground in Britain. Hong Kong is also moving onto a new invention, HKID smart cards. This is personal identification cards of Hong Kong citizens which will contain their personal information including thumbprints. The other type of commonly used smart cards in Hong Kong and the world is SIM cards, Subscriber Identity Module. They are cards that you put in your cell phone to receive signals from your service providers which will give you access to phone calls. ...read more.

This helps both the firm and the customers to save time from taking in hard cash and changing money back to the customers. There are also a lot of people that is afraid to lose the card among with the card's deposit. They believe the amount of deposit is too expensive and their ideal price of deposit is $21-30(Lang209, 4.5) compare to the $50 original price. According to the author of Lang209, a reason of setting the high deposit by the company was "to recover the money that passengers did not pay back the negative amount inside the Octopus Card"(Lang209, 4.5) Advantages of Octopus Octopus also benefits Hong Kong society with people paying with Octopus and not hard cash. For example, when people from Hong Kong take the bus and when they do have enough change to pay the exact fare, then the person will have to pay a little more than the exact fare. But by using the Octopus, the machine takes out exactly the amount as asked, therefore for the people that uses it, it will benefit for them from saving the unnecessary amount that they would have to pay if they do not have enough change and saving time from finding enough change. Some people also believes Octopus is good because "they could use the very last $0.1 in the ticket to take the most expensive journey"(Lang209, introduction) While the security of smart cards are also better than credit cards also in a way because credit cards can be hacked easily online to get their information to consume things, "A 2-year-old security hole in Microsoft Corporation's Internet Information Server (IIS) software let a computer cracker download thousands of credit-card numbers from e-commerce sites recently and post them on the Internet."(CNN) Another way that it is more save is that, it can not be read from illegal credit card readers and therefore, smart cards cannot be copied for illegal use. ...read more.

Greater convenience - card holders can benefit from the convenience of using one card for various functions. Faster travel - facilitates the future introduction of the Automated Passenger Clearance System which will help reduce the queuing time. Quality service - provides the potential to acquire on-line Government services conveniently over the Internet or at self-service kiosks without the need to attend Government offices in person."(HKID 1). But when it comes to policemen checking people's HKID on the street, does this mean that the policemen will have access to the person being checked's personal information? Wouldn't this be interfering the person's personal private information? All these benefits all the Hong Kong people because they reduce the crime of using fake HKID. Even there are some disadvantages to these smart cards, but it helps Hong Kong's whole general economy runs faster.(Lang209) Octopus is fast and easy as known, it saves time of consumers and shops. Consumers now can carry much less cash with them. Smart cards are beginning to be a way that Hong Kong is seeking to reduce crime, such as Octopus and the new HKIDs. But are these octopus cards and SIM cards made as intended? We cannot study this question on the HKID cards yet because are not distributed to all Hong Kong citizens yet, as it is only distributing by age groups which would have effect to a survey, if one was done. But it is definitely made as intended for Octopus and SIM cards, as it has high security system. These smart cards has been doing the best jobs maintain crime and the running of the Hong Kong society. They also benefited a lot for Hong Kong residents, because the way the smart cards operate are very convenient and they help to speed up Hong Kong people's lives, as Hong Kong people always say, "Time is money". As Hong Kong is beginning to rely more on smart cards, this means that they have taken over parts of our daily life. They are also being used legally, therefore it has been encouraged to continue. ...read more.