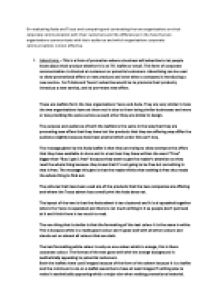 Evaluate the external corporate communications of Asda and Tesco.

﻿On evaluating Asda and Tesco and comparing and contrasting the two organisations on their corporate communication with their customers and the differences in the how the two organisations communicate with their audience and which organisations corporate communications is most effective. 1. Advertising ? This is a form of promotion where a business will advertise to let people know about their product whether it is on TV, leaflet or email. This form of corporate communication is directed at customers or potential customers. Advertising can be used to show promotional offers or new products and even when a company is introducing a new service. So if Asda and Tesco?s advertise would be to promote their products, introduce a new service, and to pro+mote new offers. These are leaflets form the two organisations Tesco and Asda. They are very similar in how the two organisations have set them out in due to them being similar businesses and more or less providing the same service as each other they are similar in design. The purpose and audience of both the leaflets is the same in the way that they are promoting new offers that they have but the products that they are offering may differ the audience slightly because Asda have alcohol which under 18s can?t buy. ...read more.

The style of the Asda is simple whereas the Tesco one looks completed by having irrelevant images and not picture/animation of actual salt. The layout is better on the Asda one because it is less clustered unlike the Tesco one. 1. Livery on vehicles ? The liver on a vehicle of company represents the whole company and if that person has not seen the company their first impression will be on the livery alone so it needs to be effective. It is clear to see who the vans belong due to both of them using their corporate colours and both are very bright and the structure of both of them is organised and neither are clustered and completely un-readable. The purpose and the audience of this is really anybody standing around they instantly know who the vans belong to and which company they are for. The designs meet the purpose which to allow people to know that they deliver to your home and that is what it says on the van. The format on the Tesco one is better because if the van is moving people are still able to read that and the Asda one people cannot that easily read it. ...read more.

Asda sponsored the Paralympics which is a worldwide event however they are a national business however this generated a lot business for Asda due to the fact that they are sponsoring an even of its nature. This meant on promotional material for the Paralympics Asda logo would appear and millions of viewers would see it. Tesco did not due such a big event so their sponsorship would not have been as effective Asda because the event they sponsored was a nation even called Race For Life which still is a good way to promote their business, but is not as effective the Asda sponsorship. In conclusion in some aspects Tesco is better but in others Asda is better. Asda Celebrity endorsement/marketing department is better due to the fact that they have had more recognisable celebrities and their Digital/TV advertisements are more effective, their packaging was more effective and there sponsorship would have been more effective. They need to improve on these categories so their corporate communication is as effective as it can be. Tesco is better in the mission statement due to the fact that it is more concise therefore it is more effective and efficient, their logo is better due to being in block letter and the livery on their vehicle was better because it was much simpler. ...read more.