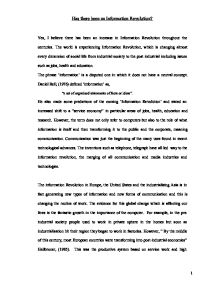 Has there been an Information Revolution?

Has there been an Information Revolution? Yes, I believe there has been an increase in Information Revolution throughout the centuries. The world is experiencing Information Revolution, which is changing almost every dimension of social life from industrial society to the post industrial including issues such as jobs, health and education. The phrase 'information' is a disputed one in which it does not have a neutral concept. Daniel Bell, (1976) defined 'information' as, "a set of organised statements of facts or ideas". He also made some predictions of the coming 'Information Revolution' and stated an increased shift to a "service economy" in particular areas of jobs, health, education and research. However, the term does not only refer to computers but also to the role of what information is itself and then transforming it to the public and the corporate, meaning communication. Communication was just the beginning of the many uses found in recent technological advances. ...read more.

Labourers become less skilled, making work look more abstract, by limiting workplace interaction, and also by enhancing employers control of workers. The Information revolution has had its impacts by affecting local economies, central cities and towns. The highly speedy works of information technology has brought out large scale changes in the industrial workplace. This is evident in the extensive use of communications such as the IT and the internet. Information technology has helped companies enormously by enhancing communication linkages through computer networks, phone, fax, modem, video conferencing, or e-mail. These key functions enable the easy access of the IT. Answering the question it can also be said from an internet web site: www.plannersweb.com/articles/bla118.html That information revolution indicates it has increased most types of jobs. It is seen as, "IT is causing a major shift in the job market...consisting of highly skilled, well-paying jobs". This is true because these days the firms rely mostly on work in saved files having more storage capability which saves time and space. ...read more.

In the beginning of there was the spoken of stories and legends. Which were passed along by word of mouth. The receivers of these information were in small numbers. Then came along the written form of recording where information was kept. However a drawback to this was that each book of information had to be hand written and hand copied, which slowed down the progress of information from being passed by but only the rich could afford and had access to these books. The new technology invented the printing press and written word could be reproduced very quickly, cheaply and in large quantities. Finally, with the introduction of the internet I would say that the same information is now available to even more people throughout the world and much more quickly. Therefore, the information revolution is probably the most important force in shaping up the communities today. To conclude further, I would say that the impacts on a particular community will be unique and depending on its economic structure. 1 ...read more.