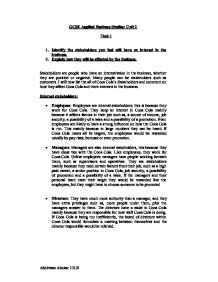 Identify the stakeholders you feel will have an interest in the business.

GCSE Applied Business Studies: Unit 2 Task 1 1. Identify the stakeholders you feel will have an interest in the business. 2. Explain how they will be affected by the business. Stakeholders are people who have an interest/stake in the business, whether they are positive or negative. Many people can be stakeholders such as customers. I will now list the all of Coca Cola's Stakeholders and comment on how they affect Coca Cola and there interests in the business. Internal stakeholders: * Employees: Employees are internal stakeholders; this is because they work for Coca Cola. They keep an interest in Coca Cola mainly because it affects factors in their job such as, a source of income, job security, a possibility of a raise and a possibility of a promotion. Even employees are likely to have a strong influence on how the Coca Cola is run. This mainly because in large numbers they can be heard. If Coca Cola meets all its targets, the employees would be rewarded usually by pay rises, bonuses or even promotion. * Managers: Managers are also internal stakeholders, this because they have close ties with the Coca Cola. Like employees, they work for Coca Cola. Unlike employees managers have people working beneath them, such as supervisors and operatives. They are stakeholders mainly because they need certain factors from their job, such as a high paid career, a senior position in Coca Cola, job security, a possibility of promotion and a possibility of a raise. ...read more.

* Bankers: Their stake in Coca Cola is about how quickly the money they have lent out is repaid. So, they have to monitor how well Coca Cola is doing, they do this because they know that the more money the business makes the quicker they will be repaid. * Shareholders: This main group of stakeholders usually have a financial interest in the business; their main stake in the business is that they want to receive a large amount of dividends from the company. Their main stake in Coca Cola is in the form of their shares (money, ownership).If the business is being run in an unproductive manner the stakeholders would be upset because they would be losing money, this would cause them to hire a new head director. If the opposite occurs and the shareholders receive a large amount of dividends they would be extremely happy with this result. * Suppliers: Their stake in Coca Cola is largely about the size and quantity of the supplies. They also expect a loyal customer, who will continue to purchase there products. The suppliers that supply Coca Cola with their ingredients would be devastated if Coca Cola decided to switch to another supplier. If Coca Cola is doing extremely well and is making a profit they would want to buy more ingredients so that they can make and sell more drinks. ...read more.

* Pressure Groups: Pressure groups can have conflicts of interest with Coca Cola; this is usually something regarding conservation/environmental problems. They can resolve this when the business changes its ways so that it can become environmentally friendly. * Government: Their may be conflicts of interest between the government and Coca Cola, but if the government has a problem with the company then there is something legally wrong. The government only interferes when it is necessary. Connected Stakeholders: * Suppliers: Suppliers would usually have a conflict of interest with the financial director; this would usually involve the exchange of money between them. For example the company might take longer then expected with paying the money owed to the supplier. They can resolve this by paying the money back immediately and increasing the supplies. * Shareholders: At the end of the day all they want is their money so they would be the ones who would be delighted with the fact that employees would be traded with machinery. The only way that they could resolve it, would be by the employees putting in more effort and increasing the overall productivity of the department he/she is working in. * Bankers: Bankers have conflicts of interest with the directors. This is because the bankers want the money that they loaned out as soon as possible, and the directors want to break even so they can pay the debt back. Although they both want the business to be successful. ?? ?? ?? ?? Abdirizak Abokar 11LB ...read more.