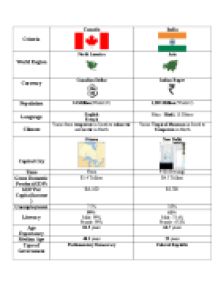 Lastly, India?s economy is developing very fast and this rate may be fairly uncontrollable, although unlikely, there is a risk improper development in business resulting in corruption and detrition in quality of exports. India reported a trade deficit equivalent to 18,080 Million USD in September of 2012. This means that India is exporting less than it is importing. This is because India is poor in oil resources and is currently heavily dependent on coal and foreign oil imports for its energy needs. Canada has the third highest reserves of oil in the world. If Canada supplies India with oil and India supplies Canada will other products such as machinery, a very strong relationship can be built between the two countries and help reduce the deficit. India is not very significant to the Canadian market; it is not a major export/import trading partner, they do not share many of the same business practices, and they have very different cultures, languages & climates. ...read more.

The economic growth rate stood at around 6.5% for the 2011?12 fiscal year.[1] It is very important for Canada to start investing and trading with India. We have seen an increase in the relationship between these two countries over the past few years. Below are some examples from the increased partnership between the countries[2]. 2005 1. Canada-India Agreement for Scientific and Technological Cooperation 2009 1. Canada-India Joint Statement 2. Memorandum of Understanding on Cooperation in Agriculture and Allied Sectors 2010 1. Canada-India Joint Statement 2. Nuclear Cooperation Agreement (ratification and implementation pending) 3. Joint Study on a possible comprehensive economic partnership agreement As we can see in the graphs below trade is on the rise between Canada and India and it continues to grow and flourish. It is important to keep these trends growing so we have a stable and healthy relationship in the future. India will prove a very strong ally to Canada as it will be a worldwide leader in a few decades. ________________ [1] "Economy of India." Wikipedia. Wikimedia Foundation, 20 Oct. 2012. Web. 21 Oct. 2012. <http://en.wikipedia.org/wiki/Economy_of_India>. [2] "Foreign Affairs and International Trade Canada." India. N.p., n.d. Web. 21 Oct. 2012. <http://www.international.gc.ca/commerce/strategy-strategie/r9.aspx?view=d>. ...read more.