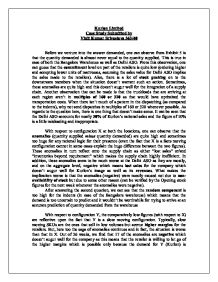 Kurlon Limited Case Study Submitted by Vinit Kumar Srivastava 363/40 Before we venture into the answer demanded, one can observe from Exhibit 5 is that the quantity demanded is almost never equal to the quantity supplied. This is true in case of both the Bangalore Warehouse as well as Delhi ASO. From this observation, one can guess that the commitment level on part of the retailers is quite low (ordering higher and accepting lower units of mattresses, assuming the sales value for Delhi ASO implies the sales made to the retailers). Also, there is a lot of stock pushing on to the downstream members when the situation doesn't warrant such an action. Sometimes, these anomalies are quite high and this doesn't augur well for the integration of a supply chain. Another observation that can be made is that the truckloads that are arriving at each region aren't in multiples of 160 or 320 as that would have optimized the transportation costs. When there isn't much of a pattern in the dispatching (as compared to the indents), why not send dispatches in multiples of 160 or 320 whenever possible. ...read more.

are reflective upon the fact that Y is a slow moving configuration. Typically, slow moving SKUs are the ones that sell in low volumes but accrue higher margins for the retailers. But, here too the saga of anomalies continues and in fact, the situation is worse than that In X. Out of 26 weeks, we find that 17 of the anomalies are negative which doesn't augur well for the company as this means that the retailer is willing to let go of the higher margins which is possible only because the demand for Y (Kurlon) is decreasing and the retailer is finding much more difficult to sell it and doesn't think that the higher margin is worth the sale effort. Critique Order Processing and inventory levels at Delhi ASO and Bangalore Warehouse for Configuration X and Y. There seems to be a complete mismatch between the quantity intended and quantity dispatched. Thus, the forecasting system is to be improved. The company is carrying huge inventory because of improper forecasting. ...read more.

The Delhi sales office does not seem to have any safety stock. But in general, it orders in such high quantity that it is keeping very high stocks. This is to curtail any possibility of stock out. It is suggested that the sales office finds a minimum safety stock and also define the maximum inventory it will hold. Also, the company would do well to change the distribution pattern, i.e. the distribution centre should just act as a transit point and all the orders by the retailers should be directly send to the central warehouse. By doing so the company would give away with the policy of holding inventory at two places. A detailed study needs to be carried out for the benefits and drawbacks of the system. Similarly, for CONFIGURATION Y The stock levels were zeros at times even though demand existed which would have resulted in lost sales. Also, the intend and sales vary a lot even though it was "made to order". Summary i) Purchase a new vulcanizing chamber ii) Capture lost sales iii) Have Minimum order constraint iv) Have a PULL System rather than PUSH System v) Better Forecasting Tools vi) Distribution centre act as a Transit point ...read more.