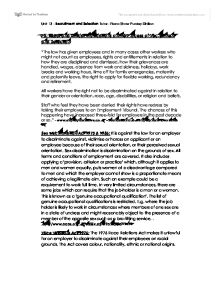 P5: Legal and Ethical Implications on the Process of Recruitment and Selection "The law has given employees and in many cases other workers who might not count as employees, rights and entitlements in relation to how they are disciplined and dismissed, how their grievances are handled, wages, absence from work and sickness, holidays, work breaks and working hours, time off for family emergencies, maternity and paternity leave, the right to apply for flexible working, redundancy and retirement. All workers have the right not to be discriminated against in relation to their gender or orientation, race, age, disabilities, or religion and beliefs. Staff who feel they have been denied their rights have redress by taking their employers to an Employment Tribunal. The chances of this happening have increased three-fold for employers in the past decade or so." - www.employmentlaws.co.uk - Information about employment laws in the UK Sex Discrimination Act 1975 & 1986: It is against the law for an employer to discriminate against, victimise or harass an applicant or an employee because of their sexual orientation, or their perceived sexual orientation. ...read more.

- http://www.acas.org.uk/index.aspx?articleid=1411 Race Relations Act 1976: The 1976 Race Relations Act makes it unlawful for an employer to discriminate against their employees on racial grounds. The Act covers colour, nationality, ethnic or national origins. Direct discrimination is the most obvious form of discrimination (e.g. where a particular job is only open to people of a specific racial group). Indirect discrimination takes place where the employer treats all workers the same way, whatever their race etc, but the result of the treatment is that workers of a particular racial group are disadvantaged. (E.g. like introducing a dress code without good reason, which might discriminate against some ethic groups). Some jobs exempt from this Act such as, a black actor/actress needed for a particular role in a film or TV. Disability Discrimination Act 1995: The Disability Discrimination Act is a piece of legislation that promotes civil rights for disabled people and protects disabled people from discrimination. ...read more.

The Act allows an individual to claim pay equal to that received by members of the opposite sex on the grounds that they are doing: * Like work * Work rated as equivalent under a job evaluation scheme * Work of Equal Value - in terms of demands made under such headings as effort, skill and decision-making Claims can be pursued through the Employment Tribunal system. - http://www.direct.gov.uk/en/index.htm Rehabilitation of Offenders Act 1974: The Act enables criminal convictions to become 'spent', or ignored after a 'rehabilitation period'. Sentence Rehabilitation period - people age 17 or under when convicted Rehabilitation period - people age 18 or over when convicted Prison sentences of 6 months or less 3 1/2 years 7 years Prison sentences of more than 6 months - 2 1/2 years 5 years 10 years Absolute discharge 6 months 6 months Applicants who are asked on an application form or at an interview whether they have any previous convictions, if they do, they can answer no if the convictions have been spent. Unit 13 - Recruitment and Selection Tutor - Fiona Shaw Purdey Dhillon ...read more.