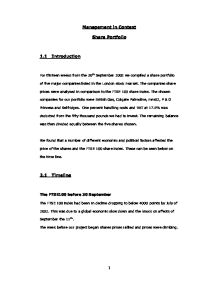 Management in Context Share Portfolio 1.1 Introduction For thirteen weeks from the 30th September 2002 we compiled a share portfolio of five major companies listed in the London stock market. The companies share prices were analysed in comparison to the FTSE 100 share index. The chosen companies for our portfolio were British Gas, Colgate Palmolive, mm02, P & O Princess and Selfridges. One percent handling costs and VAT at 17.5% was deducted from the fifty thousand pounds we had to invest. The remaining balance was then divided equally between the five shares chosen. We found that a number of different economic and political factors affected the price of the shares and the FTSE 100 share index. These can be seen below on the time line. 2.1 Timeline The FTSE100 before 30 September The FTSE 100 index had been in decline dropping to below 4000 points by July of 2002. This was due to a global economic slow down and the knock on affects of September the 11th. The week before our project began shares prices rallied and prices were climbing. Week 40 The United States uses air strikes in Iraq's air exclusion zones to try to resolve the weapons inspections crisis. We acquire the five shares. P&O princess announce possibility of merger with Carnival line rather than that of Royal Caribbean. IF P&O break merger deal with Royal Caribbean they may face break fee of 62.5 million dollars. The share price does not respond well to this news falling by 6.5%. Week 41 Following Mon 30th, the Dow Jones index closed down 109 points or 1.4% at 7,591, its lowest level for four years as weak company figures and falling consumer spending levels added to investor's fears. ...read more.

Transco, British Gases network supplier came under attack after hundreds of people were left without gas for more than a week and say they are not being given enough compensation. Legal action was threatened by the residents of the area if more compensation was not offered up. Share prices of British gas in comparison fell, until the following week when the situation was resolved. Week 52 Retail shares fell because of worries about weak sales in the crucial Christmas period and weaker confidence for the year ahead. Share prices dropped further when 29 British Gas service engineers in Cambridge staged a one-day strike on Friday over regional pay. They say it is unfair that engineers in some areas earn an extra �500 each year. The workers want the allowances in Cambridgeshire, Hertfordshire, Suffolk and north Essex to match those in Bedford and Milton Keynes. British Gas said they had already reached an agreement with the majority of their workers on the pay issue.5 Week 01 War in Iraq beckoned with Sadam Hussein defiant towards US and UK and the build up of troops in Kuwait. FTSE 100 rises as Christmas shopping has boosted UK retailer's sales. Week 02 World markets fluctuate further as UN weapons inspectors provoke Iraq with spot checks. War seems more imminent. It is reported in the FT that P & O's take over with Carnival may have to go before the European competition commission again to get approval. Share price looks shaky as it falls further. 3.0 The Companies and Markets 3.1 Selfridges and Retailers in General Retailers in general during the three months felt a squeeze upon their usual pre- Christmas sales as an economic slow down loomed. ...read more.

4.0 Conclusion World stock markets have racked up a third consecutive year of losses, making the current share price slump one of the longest on record. The decline reflects sluggish economic growth, weak corporate profits, a spate of accounting scandals in the US, and fears over war in Iraq. Overall our portfolio made a loss and performed about as well as the FTSE 100. The shares that did especially well were the MMO2 mobiles shares as these made a profit in the margin of �1000, which would count for a 10% profit on the initial �9500 invested. The other shares all made loses but after the finish date P&O would have made a profit as the final approval of the merger took place and the shares rose to �5.07 a share. In retrospect if we were to do this project again, we may have chosen less profitable, troubled companies as there is more information available in the media. We would have also chosen only UK companies rather than one in the US market as well as this made it more confusing to follow its path over the last few months. The main points of improvement would be to be more aware of the markets and how they operate as well as signing up for Financial Times every day. We decided that it would have been better to meet more often and concentrate upon the individual companies more as a group than as individuals. 1 http://investor.colgatepalmolive.com/ReleaseDetail.cfm?ReleaseID=97999&ReleaseType=Earnings 2 Financial times, Vodafone turns up the heat on Vivendi over Cetegel, wed November 13th 3 FT, Vodafone turns up the heat on Vivendi over Cetegel, wed November 13th 4 http://investor.colgatepalmolive.com/financial_info.cfm 5 http://news.bbc.co.uk/1/hi/england/2608883.stm 6 http://news.bbc.co.uk/1/hi/england/1062212.stm 1 ...read more.