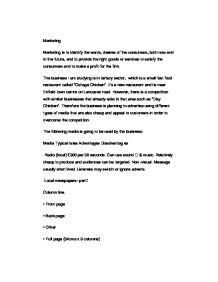 Marketing is to identify the wants, desires of the consumers, both now and in the future, and to provide the right goods or services to satisfy the consumers and to make a profit for the firm.

Marketing Marketing is to identify the wants, desires of the consumers, both now and in the future, and to provide the right goods or services to satisfy the consumers and to make a profit for the firm. The business I am studying is in tertiary sector, which is a small fast food restaurant called "Cottage Chicken". It's a new restaurant and its near Enfield town centre on Lancaster road. However, there is a competition with similar businesses that already exist in that area such as "Dixy Chicken". Therefore the business is planning to advertise using different types of media that are also cheap and appeal to customers in order to overcome the competition. The following media is going to be used by the business: Media Typical rates Advantages Disadvantages Radio (local) �300 per 30 seconds. Can use sound( & music. Relatively cheap to produce and audiences can be targeted. Non-visual. Message usually short lived. Listeners may switch or ignore adverts. Local newspapers- per( Column line. � Front page � Back page � Other � Full page (34cms x 9 columns) � 1/2 page (17cms x 9 columns) � 1/4 page (17cms x 5 columns) � 1/4 page (17cms x 4 columns) �7.60 �6.30 �5.30 �800 �600 �450 �350 Adverts can be linked to local conditions. Can be used for test marketing before national launch. Reproduction and layout can be poor. Adds often unread Leaflets �200 per 2000 coloured. Low cost.( Colour available. Junk mail thrown away. Mail shots often inaccurately targeted. Before the business could advertise they had to think about taking out a loan, which can be easily paid back because they did not have enough money of their own. So they took out a short term loan of I year in order to pay less interest, which is the charge of borrowing �3000 from a bank. In addition, the bank offered them a variety of loans such as business starter loans and small firm guarantee scheme. ...read more.

They got the information of government statistics (census data) about Enfield. It shows information such as where people live, their age, unemployment, full time earnings etc. but the problem with the data is that its 5 years old and a full census is carried out every 10 years. A copy of this is shown on the next page. I gathered the information and presented it on graphs. The data is divided into segments according to facts about them as members of the population. This is called segmentation by demographics. There is another market segmentation that they could use, which is psychographics segmentation. In this people are divided according to their life styles, made up of their attitudes, beliefs and habits. After they done all the research they wanted to know about consumer behaviour, what makes people buy? For this they identify the types of purchases that people make which involve different levels of decision making such as: Routine purchase - these are every day purchases, which do not require much( thought e.g. bread, milk for to use in breakfast. This business comes under limited - decision purchases because it's a new business. These purchase are less routine and involve more careful thought, because it's a new business and has new products, a purchaser will carry out a limited amount of research before deciding whether or not to buy it. Once they are familiar with the product, it may then become a routine purchase. So to the product a routine purchase, when planning their advertising, its important for business to know who has most influence over the buying decision, as well as who actually makes the purchase. Next, they will need to create the right mix. When marketing their products, the business will need to create a successful mix of: The right product( Sold at the right price( In the right place( Using the most suitable promotion.( � Product - for this business there is no point spending a fortune on promotion or charging a competitive price unless people want to buy it. ...read more.

Items that are better than planned are called favourable variances, and items that are worse are called unfavourable variances. From this the owner will be able to decide why it is spending more on raw materials, petrol and electricity. Conclusion My new business, which opened in my area, is getting successful as the owner took out a small campaign. By investigating different types of media, which they could afford as a new business like local newspapers, leaflets they have attracted more customers. As they took out a 1-year short-term loan of �3000 from a bank they also did a primary research and a secondary research in order to identify the wants, desires of the consumers, both now and in the future. This was very helpful for them as this increase their sales, which means more profit and build a good reputation. Sp by meeting this objective they are over coming the competition against their rivals. They also used different pricing strategies such as destroyer pricing in order to beat their rivals and enter a new market as well as promotional strategies like point of sale promotion and keep upgrading their products, which attracted and make the customer buy the goods. However there are some problems like their place, which is a bit far from town centre that means loss of customers. Also environmental effects as they created more packaging, the more the environmental cost they had to pay for disposing of it. I think they could improve their business by selling franchises in order to cover a geographic area more quickly. As they will receive continuous royalty payments they can buy advance technology like computer to keep ahead in today's market. This will help them in many ways like sending e-mails to customers all over the country through Internet, which is cheap and quick rather than sending mails through post. But all this needs very careful planning. ...read more.