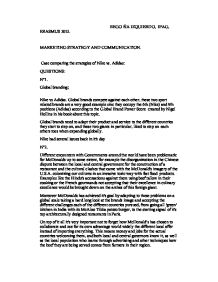 BEGO�A IZQUIERDO, IPAG, ERASMUS 2012. MARKETING STRATEGY AND COMMUNICATION. Case comparing the strategies of Nike vs. Adidas: QUESTIONS: N�1. Global branding; Nike vs Adidas. Global brands compete against each other, these two sport related brands are a very good example sinc they occupy the 6th (Nike) and 9th positions (Adidas) according to the Global Brand Power Score created by Nigel Hollins in his book about this topic. Global brands need to adapt their product and service to the different countries they start to step on, and these two giants in particular, liked to step on each others toes when expanding globally. Nike had several issues back in it's day N�2. Different encounters with Governments around the world have been problematic for McDonalds up to some extent, for example the disorganization in the Chinese dispute between the local and central government for the construction of a restaurant and the cultural clashes that came with the McDonald's imagery of the U.S.A. ...read more.

This means money and jobs for the actual countries welcoming them, and both local and central governors know it, as well as the local population who learns through advertising and other techniques how the beef they are being served comes from farmers in their region. N�3. McDonald's CEO Greenberg was in charge when the burger and fries model started to fade away, it was just when what lacked importance was to sell more burgers and the new objective was to see what other things, in their market, they could control with the money the core business achieved. This meant being stakeholders of different chains, like Donatos, Aroma, or Boston Market. The increase of cool spots to stop by, like Starbucks, sushi places, etc. pushed the brand even further away form being any hipster headquarters, making McDonalds be McDonald's. ...read more.

N� 4. It's evident how any realistic brand knows that any company that goes global takes risks of making mistakes, like the initial McDonalds unfashionable "vulgar-cuisine" spaces in France, but thanks to this errors the brand can quickly adapt to that country and even make tryout's in others attracting more consumers. The image of a superbrand that nourishes itself in a destructive manner from the local cultures is shared between some parts of the population who are very sensitive to the problems globalization creates and that feels that the unification of our cultures under the so called American Dream is destructive. This destructiveness is so towards the country's roots and therefore accuse the brand of contributing with an alienating trend of Americanizing the rest of the world who is quickly forgetting their own traditions as the arched brand continues to feed new generations of Mclovers. ...read more.