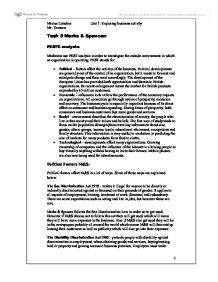 PEST analysis for M&amp;S and Oxfam.

Task 5 Marks & Spencer: PESTE analysis: Marketers use PEST analysis in order to investigate the outside environment in which an organization is operating. PEST stands for: * Political - factors affect the activity of the business. Political developments are generally out of the control of an organization, but it needs to forecast and anticipate change and then react accordingly. The development of the European Union has provided both opportunities and threats to British organizations. Its recent enlargement meant the market for British products expanded by 45 million customers. * Economic - influences look at how the performance of the economy impacts on organizations. All economies go through cycles of prosperity, recession and recovery. The business cycle is especially important because of its direct effect on consumer and business spending. During times of prosperity, both consumers and business customers buy more goods and services. * Social - environment describes the characteristics of society, the people who live in that society and their values and beliefs. The first area of study tends to focus on the population demographics revealing information about size, gender, ethnic groups, income levels, educational attainment, occupations and family structure. This information is very useful to marketers in predicting the size of markets for many products from food to clothe. * Technological - developments affect many organizations. Growing ownership of computers and the influence of the Internet is allowing people to buy virtually anything without having to leave their homes. ...read more.

The reason for this is because when you borrow money from the bank you have to pay them interests because the bank is sacrificing their ability to use that money. Marks & Spencer has to be careful not to borrow more than they actually need because interest repayments may rise causing M&S more expenses which at the end of the day for them is profit that could be made. Competitive pressures: Competition affects M&S in a bad way because they have to fight in order to sell their products. Competition is one of the biggest influence to M&S. Marks & Spencer competes against businesses such as Tesco and Asda for market share by making their products high quality and healthy as well as having good prices on them. Marks & Spencer has many different ways that they could beat the competition. However they are already beating the competition because their main competitor is Waitrose and M&S is more popular and has better prices than Waitrose products. This is a good for M&S because they are one of the healthiest retailers in the UK and have competitive prices. Energy prices: Energy prices are an important cost of M&S and are a bad impact because M&S has more costs to pay. This is because M&S stores use electricity for light, cash machines, heating and air conditioning. When energy prices increase M&S then have to figure out ways how to use less electricity whether that would be installing solar panels in their store or something else. ...read more.

This is because they do not need to advertise themselves in such big ways. It is enough for Oxfam to advertise on TV by showing little adverts on how it is to live life in poverty and so on. They don't need celebrities to do that. The only thing that I think affect Oxfam is the ageing population. The ageing population affect Oxfam in a good way because older people seem to be a lot kinder when it comes to donating money to charities such as Oxfam. Technological: Technological factors affect Oxfam in a lot different ways. Some of those ways are: Internet: The internet is a big influence to Oxfam. Oxfam use the internet in their charity. The way that they use the internet is that they let people donate money to the charity by going to the www.oxfam.com. They also sell some products online where people can buy them and the money raised from selling those products also goes to the Oxfam charity. The following print screen shows Oxfam's website where you can buy and donate money to: TV: TV is a good impact on Oxfam because they are able to advertise their charity. If not for TV Oxfam would not get as many donations due to the simple fact that people won't know the charity really well. Radio: The radio has impacted Oxfam in a good way because they are also able to advertise themselves. When using the radio Oxfam would usually advertise them selves in order to get more donations. Marius Liatukas Unit 1: Exploring business activity Mr. Yamson 1 ...read more.