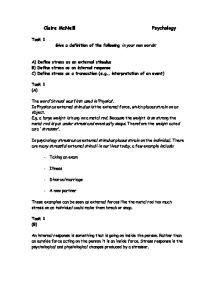 Claire McNeill Psychology Task 1 Give a definition of the following in your own words: A) Define stress as an external stimulus B) Define stress as an internal response C) Define stress as a transaction (e.g., interpretation of an event) Task 1 (A) The word 'Stress' was first used in 'Physics'. In Physics an external stimulus is the external force, which places strain on an object. E.g. a large weight is hung on a metal rod. Because the weight is so strong the metal rod is put under stress and eventually snaps. Therefore the weight acted as a ' stressor'. In psychology stress as an external stimulus places strain on the individual. There are many stressful external stimuli in our lives today, a few example include: - Taking an exam - Illness - Divorce/marriage - A new partner These examples can be seen as external forces like the metal rod too much stress on an individual could make them break or snap. Task 1 (B) An internal response is something that is going on inside the person. Rather than an outside force acting on the person it is an inside force. Stress response is the psychological and physiological changes produced by a stressor. ...read more.

Task Seven Discuss how significant changes in a person's life may be major sources of stress ( use at least 3 examples of 'significant life events). Three significant life events that may be major sources of stress could be: 1. A Death in the family 2. A Divorce 3. An illness 1. A death is a major source of stress. Death is a dull and touchy subject for some people. This situation can bring out major emotional stress. Death puts major strain on an individual and at some point the individual will snap. People fight their emotions when a death occurs but at some stage maybe even a month or year form the event as happened the person will finally break. 2. A divorce can put stress on a person but sometimes a person can be relieved. As divorce is along process a person will get more and more frustrated at some point. A person may get completely relaxed as it is drawing towards the end and an other may break with amount of stress. 3. Illness is a terrible thing and can cause a person to feel down and depressed. Depression is very likely especially if they have not be diagnosed with anything but at some stage in the cycle they will feel a strain on the and just like a weight on a metal rod they will finally snap. Claire McNeill ...read more.