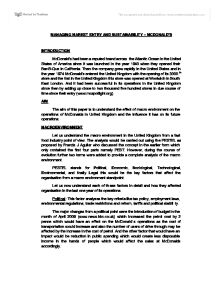 The aim of this paper is to understand the effect of macro environment on the operations of McDonalds in United Kingdom and the influence it has on its future operations.

MANAGING MARKET ENTRY AND SUSTAINABILITY - MCDONALD'S INTRODUCTION McDonald's had been a reputed brand across the Atlantic Ocean in the United States of America since it was launched in the year 1940 when they opened their Bar-B-Que in California. Then the company grew rapidly in the United States and in the year 1974 McDonald's entered the United Kingdom with the opening of its 3000th store and the first in the United Kingdom this store was opened at Woolwich in South East London. And it had been successful in its operations in the United Kingdom since then by adding up close to two thousand five hundred stores in due course of time since their entry (www.mcspotlight.org). AIM The aim of this paper is to understand the effect of macro environment on the operations of McDonalds in United Kingdom and the influence it has on its future operations. MACROENVIRONMENT Let us understand the macro environment in the United Kingdom from a fast food industry point of view. The analysis would be carried out using the PESTEL as proposed by Francis J Aguilar who discussed the concept in the earlier form which only contained the first four parts namely PEST. However, during the course of evolution further two terms were added to provide a complete analysis of the macro environment. PESTEL stands for Political, Economic, Sociological, Technological, Environmental, and finally Legal this would be the key factors that affect the organisation from a macro environment standpoint. Let us now understand each of these factors in detail and how they affected organisation in the last one year of its operations. ...read more.

expected to continue the organisation would require to consider the factor of adding up more drive-in stores as more and more customers may opt for walk-ins rather than a drive-in and may move the drive-in restaurants to sub-urban locations to achieve efficiency. - On the economical front there seems to some good news as the economy is recovering from the recession and the company can leverage from this by aggressively targeting their customers who have moved in to opt their services during the recession as part of curtailing their budgets. The same can be retained by offering more quality products or restaurants to target the niche market through differential marketing techniques or targeted marketing. - The sociological factors like health epidemics forced the company to readjust its strategies and hence a customised build up of business continuity plan on these scenarios would ensure that the organisation can reach out its customers with an effective plan to counter these kinds of threats. - On a technological front the provision of Wi-Fi can be extended to include tie-ups with online community networks by providing gaming stations and large screen televisions to attract and retain new customers and old customers respectively. - From an environmental perspective the implementation of LEED (Leadership in Energy and Environmental Design) designs across all the stores which would enable McDonalds to achieve goodwill marketing through green marketing. - The legal aspects and the impact of the McLibel case (Haig, 2003) explain the implications of legal issues on brand value. Hence, a coordinated and concerted effort would be required on this front to avoid such pitfalls in future. ...read more.

Promotion Promotion can be defined as the types of communications that are used by the marketing strategist to convey the message about a product to a target audience. There are different ways of communication namely advertising, public relations, word of mouth, and point of sale. McDonalds works on different campaigns to gain advantage through various modes of communication currently McDonalds are running one of the biggest monopoly campaigns (www.marketingmagazine.co.uk) wherein they have partnered with multiple modes of communication like the TV adverts, Press publication and online activities. From time to time McDonalds runs different campaigns to correspond with the launch of new products. The other campaign that is running include is the concept 'There's a McDonalds for everyone' in the United Kingdom which is targeted to wider spectrum of the population. The marketing strategist develops a plan to target a segment or at times the whole population and accordingly the campaigns are designed and deployed in the market place. Conclusion Based on the above it can reasonably concluded that McDonalds has imbibed the concepts of PESTLE and Marketing mix in their strategies and have carried on their activities by focussing on this concepts to achieve success in the industry. They are deriving competitive advantages by evaluating the markets inline with the 4Ps strategy and constantly scanning the local environment by using PESTLE and also utilising the latest additions in PESTEL which is being coined recently as PESTELED the last two being the Ethical and Demographic parts which are also undertaken by McDonalds in a different format. The above are the factors through which McDonalds has achieved this growth and its rapid expansion has ensured that the company would sustain the growth on a long term basis through its franchising mode of positioning strategy. ...read more.