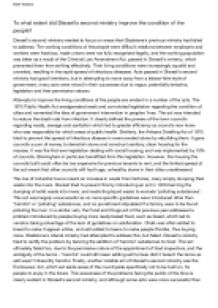 To what extent did Disraelis second ministry improve the condition of the people?

﻿Beth Walters To what extent did Disraeli?s second ministry improve the condition of the people? Disraeli?s second ministry needed to focus on areas that Gladstone?s previous ministry had failed to address. The working conditions of the people were difficult; relations between employers and workers were fractious, trade unions were not fully recognised legally, and the working population was bitter as a result of the Criminal Law Amendment Act, passed in Disraeli?s ministry, which prevented them from striking effectively. Their living conditions were increasingly squalid and crowded, resulting in the rapid spread of infectious diseases. Acts passed in Disraeli?s second ministry had good intentions, but in attempting to move away from a laissez-faire style of government, many acts were mixed in their successes due to vague, potentially tentative, legislation and their permissive natures. Attempts to improve the living conditions of the people are evident in a number of the acts. The 1875 Public Health Act amalgamated weak and convoluted legislation regarding the condition of cities and cemented the idea of government intervention in peoples? lives. ...read more.

Chalk was often added to bread to make it appear whiter, and salt added to beers to make people thirstier, thus buying more. Gladstone?s Liberal ministry had attempted to address this, but failed. Disraeli?s ministry tried to rectify the problem by banning the addition of ?harmful? substances to food. This act ultimately failed too, due to the permissive nature of the appointment of food inspectors, and the ambiguity of the terms - ?harmful? could still mean adding salt to beer didn?t breach the terms as salt wasn?t inherently harmful. Finally, another notable act of Disraeli?s second ministry was the Enclosures? Act, which set aside areas of the countryside specifically not to be built on, for people to enjoy in the future. This awareness of the problems facing the public of the time is clearly evident in Disraeli?s second ministry, and although some acts were more successful than others, they were certainly well intentioned. Disraeli?s ministry was perhaps more effective in improving the working conditions of the people. ...read more.

This was intended to reduce merchant seamen deaths and also extend the reach of state legislation. However, it failed miserably as no clarification was made on where the line should be drawn - leaving it up to the corrupt shipowners instead. The bulk of these reforms were passed in 1875/6, and there is little reform dealing with the condition of the people after 1876. Disraeli moved onto foreign affairs after this point and did not continue his introduction of social legislation, which could lead to questions over his commitment to reform, and possibly whether all those reforms were really a product of his own social spirit, or rather by provocation of his ministers. Many of the reforms simply built on from previous, popular Liberal ideas. However, he did improve the working conditions and relations of the people, to a greater extent than he improved the living conditions perhaps, as this type of working legislation was not as new or tentative as the government becoming more involved in the lives of its people, and was welcomed by trade unions and workmen. ...read more.