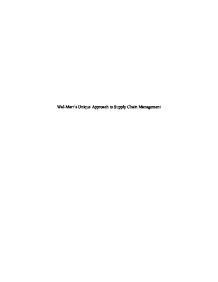 Wal-Mart's Unique Approach to Supply Chain Management Retail super-giant Wal-Mart has fought its way to becoming the world's largest company. Much of their success can be attributed to providing a vast assortment of products at exceptional prices all under one roof. Wal-Mart began operations in 1964 and has since become the world leader in retail. Today, Wal-Mart is visited by 138 million customers per week at their 4,750 stores. Wal-Mart operates under four basic rules in order to satisfy such a large number of customers: Respect the individual, provide the best service to their customers, strive for excellence, and exceed customer expectations. Their corporate mission focuses on a global growth strategy through concentrated integration. The company continues to expand its existing discount stores, warehouses, and super-centers. The company maintains two goals: First, Provide the customer with what they want, when they want it, all at value and secondly, team spirit through total dependency on associates to treat customers as they would want to be treated. Their business strategy is to provide well-known name brands at an everyday low price. Wal-Mart has a wide range of products offered. They offer everything from electronics, movies, books, toys, games, gardening supplies, home supplies, photo development, gifts, jewelry, and at some locations even automobile, optometry, and grocery shopping centers. ...read more.

Drivers report their hours of service to Wal-Mart daily. A coordinator plans the drivers' dispatches based upon available driving time and estimated travel time between the distribution center and the stores. Wal-Mart usually informs a driver of his daily dispatches upon his arrival or return to the distribution center. Usually, a driver is dispatched to take a shipment to a store and return to the distribution center with an empty trailer. The next dispatch would be from the distribution center to a store where he would spend the night. Wal-Mart stores have receiving docks for trailers loaded with merchandise. The process of unloading trailers by store personnel usually occurs at night when customer traffic is light and freight can be staged in the store aisles without inconveniencing customers. The unloading of trailers is generally scheduled two hours apart. For example, if a store receives three trailers the first trailer may be scheduled to begin unloading at midnight. The second trailer would be scheduled for unloading at 2:00 a.m., and the third trailer would be scheduled to begin unloading at 4:00 a.m. A driver must have the trailer at the dock no later than the scheduled unloading time irrespective of when he arrives at the store. ...read more.

The company has so much power that its pricing demands have forced suppliers to lay off employees and move operations overseas. While the customer enjoys low prices and Wal-Mart enjoys staggering profits, suppliers are sometimes forced to downsize in order to fulfill Wal-Mart's demands. For a supplier to sign a contract with Wal-Mart is a great accomplishment at first. Wal-Mart has become legendary for streamlining and improving their supplier's processes. There are times when Wal-Mart even forces suppliers to revamp everything from their packaging to their computer systems. Then, once all is said and done, Wal-Mart will often tell the supplier what it will pay for its goods. This can be dangerous for the supplier if Wal-Mart's demands for price are too low. Despite the negative accusations of some critics, there is no doubt that Wal-Mart is doing something right. In becoming the world leader in retail stores they have managed to become the benchmark for supply chain efficiency. They have pioneered new technology and new ideas. Use of their astounding amount of capital has allowed them to turn their cutting edge supply chain ideas into functional technology that is a part of everyday transactions at Wal-Mart stores across the nation. Their tenacity at creating an efficient supply chain in order to beat the competition on price and selection has certainly paid off. ...read more.