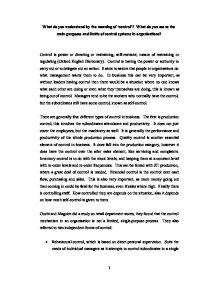 What do you understand by the meaning of 'control'? What do you see as the main purposes and limits of control systems in organisations?

What do you understand by the meaning of 'control'? What do you see as the main purposes and limits of control systems in organisations? Control is power or directing or restraining; self-restraint; means of restraining or regulating (Oxford English Dictionary). Control is having the power or authority to carry out or to delegate out an action. It aims to assure that people in organisations do what management wants them to do. In business this can be very important, as without leaders having control then there would be a situation where no one knows what each other are doing or even what they themselves are doing, this is known as being out of control. Managers tend to be the workers who normally have the control, but the subordinates still have some control, known as self-control. There are generally five different types of control in business. The first is production control, this involves the subordinates attendance and productivity. It does not just cover the employees, but the machinery as well. It is generally the performance and productivity of the whole production process. Quality control is another essential element of control in business. It does fall into the production category, however it does have the control over the after sales element, like servicing and complaints. Inventory control is to do with the stock levels, and keeping them at a constant level with re-order levels and re-order frequencies. ...read more.

The Contingency approach is an approach, which states that there is no best structure. It depends on the contingencies of the situation. It is really saying that different situations call for different approaches. The writers on this approach include Woodward and Burns and Stalker, with their characteristics of mechanistic and organic organisations. The last approach is the Radical approach, people associated with this approach include Braverman and Marx. These views were very extreme, and had a political direction. A control system is the process, which directs and guides the organisation to its desired goals. This is done by collecting information and comparing it to the desired state. A management control system implies that the organisational control is done through managers. There are five main elements to a management control system, they include planning what is desired. This involves getting people to know what is expected from them. Their objectives are set through this means. Establishing standards of performance, which can show their level of success. Monitoring actual performance, requiring feedback. It has to be accurate, as comparison with the plan will have to be made. Comparing actual achievement against the planned target. This is the analysis aspect of the process, and the conclusions are given back to the managers who started the process. Rectifying and taking corrective action. This only happens when there are problems, which need to be looked at. ...read more.

They are all focused on one thing, so they would have to work as a team to achieve a certain financial target. This could also be another motivating factor, which would affect everyone across the companies' hierarchy. Sometimes working in groups can be a de-motivating factor. Working with machines caters for this. For example, workers in a supermarket scanning at a checkpoint, they are set targets for how many scans per hour. If they reach this they would be rewarded. This coincides with control through reward and punishment (McGregor's Theory-X). Limits of control systems include the whole de-motivating factor. This is because people generally don't like being controlled, they would prefer some sort of autonomy involved in their work. Control over behaviour is generally resented by subordinates. A good control system should be accepted willingly by subordinates, however if it were a badly run one, then there would be attempts of non-compliance by those subordinates, which are involved. Control systems may not suit the culture of the business, it also may not be needed in certain areas. If it was put into the wrong place it could upset other procedures and systems already in place. Subordinates following rules and procedures through organisational control systems achieves predictability and stability. This has a knock on effect on the ability to follow changes. It is generally thought of that lower down employees find it difficult to incorporate change in their operations. However change in organisations of any sort is hard for all the people involved normally. ...read more.