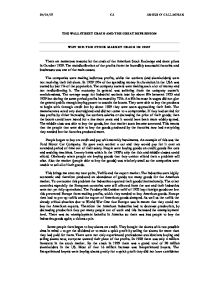 THE WALL STREET CRASH AND THE GREAT DEPRESSION WHY DID THE STOCK MARKET CRASH IN 1929? There are numerous reasons for the crash of the American Stock Exchange and share prices in October 1929. The mal-distribution of the profits from the incredibly successful factories and businesses was one of the main causes. The companies were making ludicrous profits, whilst the workers (and shareholders) were not receiving their fair share. In 1929 19% of the spending money in circulation in the USA was owned by just 1% of the population. The company owners were making such a lot of money and not re-distributing it. The economy in general was suffering from the company owner's avariciousness. The average wage for industrial workers rose by about 8% between 1923 and 1929 but during the same period profits increased by 72%. An 8% increase in wages did not give the general public enough buying power to sustain the boom. They were able to buy the products to begin with through credit but by about 1929 they were soon approaching their limit. The manufactures acted very shortsighted and did not come to a compromise. If they had settled for less profits by either increasing the workers salaries or decreasing the price of their goods; then the boom could have lasted for a few more years and it would have been more widely spread. ...read more.

In the 1920's these prices were very low and because of this many farmers were either bankrupt or deeply in debt. One quarter of North America's unemployed were farmers. Over one quarter of the farmer's income came form export to foreign countries. When America cut back on export like it did before the Wall Street Crash farmers were ruined. The cause of the farmer's problem was themselves; they were producing too much food. They were flooding the home market with food, and competition from Canada. The government in power at the time had a Laissez-faire policy. This means that they leave the country to run its own business and interfere as little as possible. This was good for some industries but definitely not for the farmers. The government did little to help the farmers. Even when the McNary-Haugen Bill was passed; in which the government would have bought the farmers' surplus crops did not help. Coolidge vetoed it twice because he said it would encourage the farmers to increase production, which would worsen the problem. Other industries inversely affected by the boom was the coal industry, which was largely replaced by the oil industry. Synthetic fibres such as Nylon were replacing cotton and putting many black workers in the south out of jobs. ...read more.

The people who had taken out the loans, and bought all these goods on credit could not pay back the loans as quickly as the bank needed. The interest rate also fluctuated during this time, so people who took out a loan on 5% interest could end up paying it back on 15% interest. The banks were very short sighted when they gave out loans, especially loans to foreign countries. They would give them more money than they had asked for and then when they wanted it back the country could not pay it back and there was nothing the banks could really do about it. When economists and bankers became worried about the loan situation Coolidge stated, "Their increase showed a natural expansion of business." He believed that the prosperity would continue. To conclude this first section of my essay we can say that there were many massive weaknesses in the American economy. These weaknesses were subtle though so people were not able to pick up on them and respond to them. On Thursday 24th of October 1929 the day of the crash itself 13 million shares were sold and on Tuesday the 29th 16 and a half million were sold. These shares were sold for a meagre price of 10 million dollars far less than what was supposed to be in the market. ?? ?? ?? ?? 23/04/07 CA ANGUS O' CALLAGHAN ...read more.