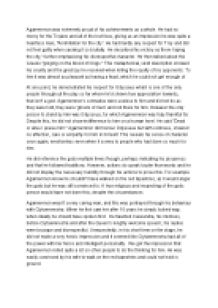 ﻿Agamemnon was extremely proud of his achievements as a whole. He had no mercy for the Trojans and all of the lost lives, giving us an impression he was quite a heartless man, ?Annihilation for the city.? He had hardly any respect for Troy and did not feel guilty when sacking it so brutally. He described his victory as them ?r****g the city,? further emphasising his disrespectful character. He then talked about the Greeks ?gorging on the blood of Kings.? This metaphorical, vivid description showed his cruelty and the great joy he received when killing the royalty of his opponents. ...read more.

However the only person to stand by him was Odysseus, for which Agamemnon was truly thankful for. Despite this, he did not show indifference to him on a human level. He said ?Dead or alive I praise him.? Agamemnon did honour Odysseus but with coldness, showed no affection, care or empathy for him in himself. This reveals his sense of character once again, emotionless even when it comes to people who had done so much for him. He did reference the gods multiple times though, perhaps indicating his piousness and that he followed traditions. ...read more.

Agamemnon wasn?t a very caring man, and this was portrayed through his behaviour with Clytaemnestra. When he first saw her after 10 years he simply looked way, when ideally he should have spoken first. He flaunted Cassandra, his mistress, before Clytaemnestra and after the Queen?s lengthy welcome speech; his replies were brusque and disrespectful. Unexpectedly, in his short time on the stage, he did not make a very heroic impression and it seemed like Clytaemnestra had all of the power with her fierce and intelligent personality. We get the impression that Agamemnon relied quite a lot on other people to do the thinking for him. He was easily convinced by his wife to walk on the red tapestries and could not hold is ground. ...read more.