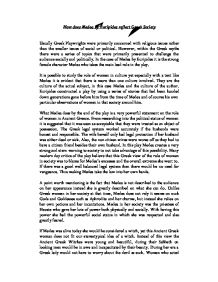 How does Medea by Euripides reflect Greek Society

How does Medea by Euripides reflect Greek Society Usually Greek Playwrights were primarily concerned with religious issues rather than the smaller issues of social or political. However, within the Greek myths there were a series of topics that were primarily presented to challenge the audience socially and politically. In the case of Medea by Euripides it is the strong female character Medea who takes the main lead role in the play. It is possible to study the role of women in culture yet especially with a text like Medea it is evident that there is more than one culture involved. They are the culture of the actual subject, in this case Medea and the culture of the author. Euripides constructed a play by using a series of stories that had been handed down generations gone before him from the time of Medea and of course his own particular observations of women in that society around him. ...read more.

With having this power she had the powerful social status in which she was respected and also greatly feared. If Medea was alive today she would be considered a witch, yet this Ancient Greek woman does not fit our stereotypical idea of a witch. Instead of this view the Ancient Greek Witches were young and beautiful, during their Sabbath on looking men would be in awe and incapacitated by their beauty. During her era a Greek lady would not have to worry about the devil as such. Women who acted like witches were considered to be powerful and interesting. They would either be good or bad which was, to be expected greatly dependant on what they did with their powers. In Ancient Greek times it was much harder to live outside of your family than it is now. Back in that era as a woman you would be very dependant on your family for welfare, social security, food and your social life. ...read more.

Looking closely at Ancient Greek women they usually possessed the characteristics of a nurturing and [passionate individual. Medea strove against men and stood up to them as a strong woman. This would not have been considered in the era of the Greeks, instead this rationality would have been left to the men whilst the women stood back. Medea stands as a great symbol of the intelligent woman who has no place in the social life of the Greek community. By this I mean other members of the Greek community would not wish to be caught up and eventually damaged by this woman's great power. She provides Euripides' complain for the actual social status that a woman has in Greek society which is likely to be more relevant to Euripides era rather than Medea's. Therefore Medea the play acts as a social statement by the playwright himself. Euripides also attempted to explain the spiritual nature of mankind and their attitudes towards other people of their own, slightly different society. ...read more.