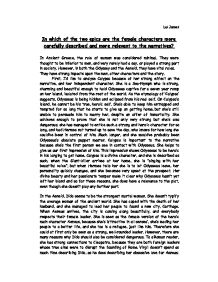 In which of the two epics are the female characters more carefully described and more relevant to the narratives? [The Odyssey and The Aeneid]

In which of the two epics are the female characters more carefully described and more relevant to the narratives?

In Ancient Greece, the role of women was considered minimal. They were thought to be inferior to men, and very rarely had a say, or played a strong part in society. However, in both the Odyssey and the Aeneid, they have vital roles.

They have strong impacts upon the men, other characters and the story.

First, I’d like to analyse Calypso because of her strong effect on the narrative, and her independent character. She is a Sea-Nymph who is strong, charming and beautiful enough to hold Odysseus captive for a seven year romp on her island, isolated from the rest of the world. As the etymology of ‘Calypso’ suggests, Odysseus is being hidden and eclipsed from his real self. On Calypso’s island, he cannot be his true, heroic self. She’s able to keep him entrapped and tempted for so long that he starts to give up on getting home, but she’s still unable to persuade him to marry her, despite an offer of immortality. She achieves enough to prove that she is not only very strong but she’s also dangerous; she has managed to entice such a strong and heroic character for so long, and had Hermes not turned up to save the day, who knows for how long she could’ve been in control of him. Much longer, and she would’ve probably been Odysseus’s absolute puppet master. Calypso is important to the narrative because she’s the first person we see in contact with Odysseus. She helps to give us our first impression of him. This impression shows Odysseus to be heroic in his longing to get home. Calypso is a divine character, and she is described as such; when the Giant-killer arrives at her home, she is “singing with her beautiful voice”, but when Hermes tells her she is to let Odysseus leave, her personality quickly changes, and she becomes very upset at the prospect. Her divine beauty and her passionate temper make it clear why Odysseus hasn’t yet left her island and so for these reasons, she does have a relevance to the plot, even though she doesn’t play any further part.

In the Aeneid, Dido seems to be the strongest mortal woman. She doesn’t typify the average woman of the ancient world. She has coped with the death of her husband, and she managed to lead her people to found a new city, Carthage. When Aeneas arrives, the city is coming along beautifully, and everybody respects their female leader. She is seen as the female version of the heroic main character Aeneas, because she’s ‘attractive in all senses’, she’s leading her people to a better life, and she too is a refugee, just like him. Therefore she could at first only be seen as a strong, well-rounded leader. However, there are many reasons why Dido should also be considered dangerous. To a Roman reader, she has strong connections to Cleopatra, because they are both foreign leaders whose true aims were to disrupt the founding of Rome. Virgil doesn’t spend as much time describing Dido, as he does describing her obsessive love for Aeneas; as he recounts the harrowing account of his journey, Dido becomes smitten with him but her entire capacity in the poem is relegated to a passing love interest of Aeneas.  Before Aeneas turned up, she was known as the widow of Sychaeus and she doesn’t exist elsewhere, independently of her male counterparts. As soon as she gives into love, she loses her power, and at the end of Book 4 Dido she proves this. She cannot live without her equal and so she takes her own life. I believe the example of Dido shows that Virgil wants to show that the women of The Aeneid cannot live by their own devices alone; they need the support of men, and other characters, and so when they are deserted, they cannot handle it. I believe this is why the women aren’t described as carefully as the men, or as carefully as the women in the Odyssey, who are much more independent and relevant to the narrative, such as Penelope.

Penelope, Odysseus' wife is far different to any Aeneid woman. For many a year, she waits patiently for the return of her husband, who may or may not ever return. She refrains from having relationships with any other men, and this wasn’t for lack of choice. Suitors were begging her from all angles to give them her hand in marriage, but she refused every one. Not only does she manage to restrain herself from doing this, she also has the cunning to trick the suitors into believing that she will one day soon marry one of them, once she has finished her weaving. Her sly trick however is to unravel the web she’d weaved during the day, at night, so that the project never had a cut-off date. Her plan was so cunning that the suitors never realised what she was doing for quite some time. Throughout the poem, not once does she lose faith in Odysseus, and she continuously appears and flaunts her wisdom and intelligence. Even after Odysseus has returned, she is careful enough to make sure he wasn’t an imposter; she uses her wits to set a task to prove that he truly was Odysseus, by making him confess the secret of their bed ;-) In fact, Penelope’s intelligence, like her husband’s, is so great that Athene must distract her while Eurycleia washes her husband when he’s in disguise, so that Penelope won’t recognize him.

The woman most apt to compare is of course, Aeneas’ wife, Creusa. Sadly, she only survives the first two books of the Aeneas, as she dies struggling to escape from Troy. Like Penelope, she is described as caring and loving, but clearly of little use to the men in the book, as Virgil decides to dispose of her quickly. Creusa like Dido also dies as Aeneas is leaving her. I am sure this is no coincidence; it further shows the dependence the women had for the men. The journey Aeneas is to make clearly isn’t intended to include women; Creusa would just get in the way. Aeneas is to leave one wife behind and find a new one in Italy, and Virgil even has the sly cheek to hint at this early in the poem, by having Creusa consenting to Aeneas getting a new wife when he reaches his destination. The woman he marries in Italy is of course Lavinia, and her role as a woman is so limited that she doesn’t actually utter a single word. She only ever appears by her mother’s side.

Like Lavinia in the Aeneid, Eurycleia is a minor character in the Odyssey. She is an aged and loyal servant to the household, who has not only nursed Telemachus as a baby, but also Odysseus. Even though theoretically, she is just a nurse, she cashes in on her role for all it’s worth. On the few occasions she appears, she has a great effect on the narrative. Not only does she protect the secret of Telemachus’s journey from Penelope, she keeps Odysseus’ identity a secret from her too. She is an independent, quick witted, intelligent woman. Too Homer, it seems women are just as important as the men, such to the extent that he mentions that Eurycleia was also of noble birth.

Camilla is the only female mortal character of the Aeneid that really has any strength. She is entrusted with the important mission of intercepting Aeneas’ army, while Turnus prepares to ambush Aeneas. She is an independent warrior. She actually refuses to wed any man, which is the opposite of every other woman. She feels she can survive on her own, and indeed she can. She is very independent and strong. She does however have the features of an undesirable character, such as her brutish appearance, and she is also an enemy. After analysis of Camilla, the reader is left confused, because she does have the strength and independence of the women in the Odyssey, even though she lives in the world of Aeneas. She is a very ambiguous character, and this ambiguity reflects the behaviour of the other women in the poem. Virgil uses Camilla I believe, for this reason. Dido for example is very ambiguous in that she starts out as a powerful leader when Aeneas arrives, but he quickly changes that for her, and Dido spends an age deciding whether she should move on and get over her previous husband, or continue mourning for him and ignore her feelings for Aeneas. On several occasions Dido acts like this, another example would be when she’s arguing in the cave with Aeneas and she keeps changing her arguments to persuade him to stay. Virgil uses Camilla to simply reflect this ambiguous behaviour in the women of the Aeneid. One thing they do share in common however is that they tend to get in the way of Aeneas, but other than that they are all different, varied, and ambiguous, with no particular pattern amongst them, where as the Odyssey’s women all stick to the trend of strength and independence. The fact that Calypso, Nausicaa and Circe attempt to hold Odysseus up on his journey I think is creatively imitated by Virgil in the way that he makes all his female mortal characters disruptive to Aeneas.

The Odyssey women are all carefully described however to ensure that they are all with attractive features, no matter how major or minor the character may be. One minor example would be Circe. Even though she only spends a year in Odysseus’s life, she manages to entice him to live with her for a year of luxury, and only with the help of Hermes does Odysseus survive the ordeal. A dangerous character no doubt, and carefully described. She also adds to the narrative in that Odysseus is shown to be worthy of divine intervention through Hermes.

Nausicaa too is an unsung heroin of the Odyssey. When she comes across the naked stranger that is Odysseus, she is direct, assertive and confident in communicating with him, and she shows further independence by being perceptive and cautious when she first comes across him. No female mortals in the Aeneid give the impression they would act in such a way.