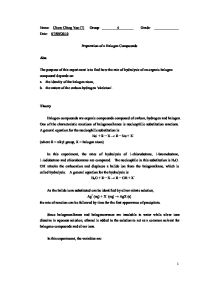 Preparation of a Halogen Compounds

Name: Chow Ching Yue (7) Group: 4 Grade: Date: 07/09/2010 Preparation of a Halogen Compounds Aim The purpose of this experiment is to find how the rate of hydrolysis of an organic halogen compound depends on: a. the identity of the halogen atom, b. the nature of the carbon-hydrogen 'skeleton'. Theory Halogen-compounds are organic compounds composed of carbon, hydrogen and halogen. One of the characteristic reactions of halogenoalkanes is nucleophilic substitution reactions. A general equation for the nucleophilic substitution is: Nu- + R-X � R-Nu + X- (where R = alkyl group, X = halogen atom) In this experiment, the rates of hydrolysis of 1-chlorobutane, 1-bromobutane, 1-iodobutane and chlorobenzene are compared. The nucleophile in this substitution is H2O. OH- attacks the carbocation and displaces a halide ion from the halogenalkane, which is called hydrolysis. A general equation for the hydrolysis is: H2O + R-X � R-OH + X- As the halide ions substituted can be identified by silver nitrate solution, Ag+ (aq) + X- (aq) � AgX (s) the rate of reaction can be followed by time for the first appearance of precipitate. Since halogenoalkanes and halogenoarenes are insoluble in water while silver ions dissolve in aqueous solution, ethanol is added to the solution to act as a common solvent for halogeno-compounds and silver ions. ...read more.

1. Among the haloalkanes (1-chlorobutane, 1-bromobutane and 1-iodobutane) All three haloalkanes give positive result, i.e. precipitate formed, in the experiment. The equations are: Ag+ (aq) + Cl- (aq) � AgCl (s) White precipitate Ag+ (aq) + Br- (aq) � AgBr (s) White precipitate Ag+ (aq) + I- (aq) � AgI (s) Yellow precipitate The rates of hydrolysis among 3 haloalkanes, fastest rate first are: 1-iodobutane > 1-bromobutane > 1-chlorobutane Consider the bond energy of haloalkanes: Bond (in haloalkanes) Bond energy / kJ mol-1 C-Cl C-Br C-I 338 276 238 Since the rate determining step involves the bond breaking of the between the C-X bond in the haloalkane, where X = Cl, Br or I. The greater the bond energy, the greater the bond strength and the lower the reactivity, therefore: Bond energy: C-Cl > C-Br > C-I Bond strength: C-Cl > C-Br > C-I Reactivity: RCl < RBr < RI As least energy is required to break the C-I bond, it is the weakest bond and most reactive, therefore the rate of hydrolysis of 1-iodobutnae is the greatest, vice versa. 2. Between haloallane and halobenzene All the haloalkanes give positive result but the halobenzene (chlorobenzene) give a negative result, i.e. no observable change in the experiment. ...read more.

There is not intermediate in an SN2 reaction, just a transition state. A transition state has no real lifetime, it is the highest energy point on the reaction coordinate as starting materials transition into products. In this reaction, a new bond is formed between the nucleophile, H2O, and the carbon atom, while the carbon-halogen bond is broken. The departing halogen is referred to as the leaving group. The species being attacked by the nucleophile is referred to as the electrophile. SN2 is a second order kinetics, rate of reaction is totally depended on both [OH-] and [RX] Rate = k [RX] [OH-] The energy level diagram of the SN2 reaction: 2. Photodecomposition of AgBr (s) At the end of the experiment, it was found that the solution containing AgBr(s) turns from pale yellow to grey. This is due to the decompostition of AgBr(s) in the presence of sunlight. 2AgBr (s) � 2Ag(s) + Br2 (g) 3. Nucleophilic substitution of halobenzenes As the lone-pair electrons of the halogen become involved in the ?-electron system in the aromatic ring, the halogbenzenes are comparatively inert and only undergo nucleophilic substitution with extreme difficulty Under 300 ?, 200 atm, halobenzenes undergo mucleophilic substitution with presence of conc. NaOH to give phenol, C6H5OH. Reference 1. Study Guide Chapter 30 P. 7, 12-13 2. Haloalkanes http://chemophile.pbworks.com/f/Halogenoalkanes.pdf 3. AUS-e-TUTE http://www.ausetute.com.au/index.html ?? ?? ?? ?? 1 ...read more.