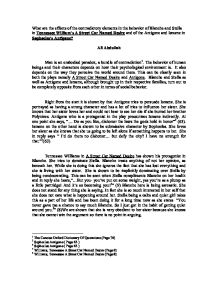 What are the effects of the contradictory elements in the behavior of Blanche and Stella in Tennessee William's A Street Car Named Desire and of the Antigone and Ismene in Sophocles's Antigone?

What are the effects of the contradictory elements in the behavior of Blanche and Stella in Tennessee William's A Street Car Named Desire and of the Antigone and Ismene in Sophocles's Antigone? Ali Abdullah Man is an embodied paradox, a bundle of contradiction1. The behavior of human beings and their characters depends on how their psychological environment is. It also depends on the way they perceive the world around them. This can be clearly seen in both the plays namely A Street Car Named Desire and Antigone. Blanche and Stella as well as Antigone and Ismene, although brought up in their respective families, turn out to be completely opposite from each other in terms of social behavior. Right from the start it is shown by that Antigone tries to persuade Ismene. She is portrayed as having a strong character and has a lot of tries to influence her sister. She knows that her sister loves her and could not bear to see her die if she buried her brother Polynices. Antigone who is a protagonist in the play pressurizes Ismene indirectly. At one point she says, "... Do as you like, dishonor the laws the gods hold in honor"2 (63). Ismene on the other hand is shown to be submissive character by Sophocles. She loves her sister as she knows that she us going to be left alone if something happens to her. She in reply says " I'd do them no dishonor... ...read more.

Ismene, Antigone's sister, refuses to help her, as she is a good citizen and wants to obey the law and Creon. At one point she says to Antigone, "What? you'd burry him when the law forbids the city?7" (61). Sophocles tries to show that Ismene is being intelligent and is aware of the fact that it is better to stay alive and maintain the name of the family rather then keeping the status without any member if the family essentially being alive. She had a slight idea of Antigone's fate she did want to stay alone as she is shown to be a more obedient character. She uses the law as a pretext for the above-mentioned reasons. Antigone is shown to be a very stubborn as well as optimistic to an extent of foolishness. She has decided to burry her brother, she is proud to do it. She makes sure that she does it irrespective of the resistance caused by Creon. She is shown to be a very brave character as well. When Ismene tells her not to what she is doing. She replied, "...I will burry him myself. And even if I die in an act, that death will be a glory...8" (63). She does not care about her fate as long as she is victorious in carrying out what she was planning to do. ...read more.