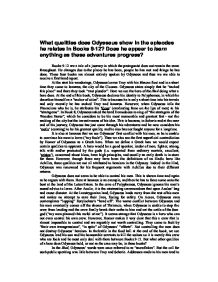 What qualities does Odysseus show in the episodes he relates in Books 9-12? Does he appear to learn anything as these adventures progress?

What qualities does Odysseus show in the episodes he relates in Books 9-12? Does he appear to learn anything as these adventures progress? Books 9-12 are a tale of a journey in which the protagonist does not remain the same throughout. He changes due to the places he has been, people he has met and things he has done. These four books are almost entirely spoken by Odysseus and thus we are able to receive a first hand report. At the start his wanderings, Odysseus leaves Troy with his Ithacan fleet and in a short time they come to Ismarus, the city of the Cicones. Odysseus states simply that he "sacked this place" and there they took "vast plunder". Here we see the hero of the Iliad doing what a hero does. At the end of this book, Odysseus declares his identity to Polyphemus, in which he describes himself as a "sacker of cities". This is because he is only a short time into his travels and only recently he has sacked Troy and Ismarus. However, when Odysseus tells the Phaeacians who he is, he attributes his 'kleos' (everlasting fame on the lips of men) to his "stratagems". In Book 8, Odysseus asked the bard Demodocus to sing of "the stratagem of the Wooden Horse", which he considers to be his most memorable and greatest feat - not the sacking of the city but the inventiveness of his idea. This is because, in Scherie and at the near end of his journey, Odysseus has just come through his adventures and he now considers his 'metis' (cunning) to be his greatest quality, and he also has not fought anyone for a long time. It is also at Ismarus that we see Odysseus' first conflict with his men, as he is unable to convince his men to leave ("my fools"). Thus we also see the first superficial contradiction by Homer of Odysseus as a Greek hero. ...read more.

After visiting Hell and consulting Achilles and Agamemnon, Odysseus now sees that to die for kleos is not worth it, though it was obviously preferable to an ignoble death. But the most important knowledge he gained there was that in death there was no joy just everlasting grief, so far as Odysseus could see. Achilles himself told Odysseus "do not...make light of death" and crucially "I would rather work...as a serf...than be a King of all these lifeless dead". After he has been told this, Odysseus has a renewed lust for life and his continued survival. Achilles had made a decision not to "return home" but this is the exact opposite to Odysseus who wishes to fulfil his nostos and "die peacefully of old age", as prophesised. He is not now a coward of danger but he does wish to continue living. Remember, though, that when Calypso offered him immortality in return for his stay there, Odysseus preferred to leave so returning to Penelope and 'philia' (attachment or union) are more important. At the end of Book 12, we are left with the wonderful image of Odysseus hanging doggedly onto the olive tree that grew over the whirlpool Charybdis below, refusing to die. Odysseus as we have seen above does not fulfil all the qualities need for an Iliadic hero, in these four books at least, though some qualities of his are listed above. But a definition of a hero in the Iliad is not quite the same as in the Odyssey and also the environment requires a different kind of hero to the one who would triumph in the Iliad. Odysseus has the qualities required to survive the ordeals that are thrown at him because he is the right hero for the tale. Arguably the greatest hero of the Iliad, Achilles, is met in the Underworld and the two dissimilar heroes talk. Homer may use this meeting to show how Achilles is from a different world from Odysseus now and that the kind of hero Achilles is may die with him. ...read more.

Odysseus thus wishes to avoid going there after seeing it and he thinks that death is not the best way to find kleos, as Achilles regrets his decision to die for it. Tiresias tells Odysseus about his destined inland journey to secure the favour of Olympus and Poseidon once more. Odysseus also sees the fates of the sinners who defied the Gods (like Sisyphus). This being placed at the end of Book 11 is related to the suitors' punishment for the Gods at the end of the story. Odysseus sees how the Gods want sinners to be punished and it must give him a sense of justice, either created anew in him or rejuvenated. Going on the Nekyia also makes Odysseus a better hero, as it elevates him above other mortals still further and even above many other heroes. In Books 9-12, we can see the change of Odysseus from an Iliadic hero to an Odyssean hero. He goes from place to place, gaining experience and getting more and more thick skinned to each new disaster. When Calypso warns him in Book 5 that on the way home he will suffer still more hardship, Odysseus shrugs it off saying "it only makes one more". He is no longer the man he was when he started the voyage and he realises it himself, claiming his "stratagems" to be his best claim to fame. He has now finally made the jump away from bi� (even though when he arrives in Ithaca, he must fight a battle and return to his old ways once more). He has become the man who recounts his story to the Phaeacians. Whilst recounting it, we can see what Odysseus considers to be the most important things in the story he accomplished. He skips through the story of the Cicones and the sacking of their city extremely quickly whilst the stratagems inside Polyphemus' cave are given special attention. We would not expect such a preference in a warlord but we would in what Odysseus has become. ?? ?? ?? ?? ...read more.