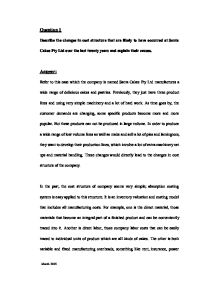 Question 1 Describe the changes in cost structure that are likely to have occurred at Santa Cakes Pty Ltd over the last twenty years and explain their causes. Answer: Refer to this case which the company is named Santa Cakes Pty Ltd manufactures a wide range of delicious cakes and pastries. Previously, they just have three product lines and using very simple machinery and a lot of hard work. As time goes by, the customer demands are changing, some specific products become more and more popular. But these products can not be produced in large volume. In order to produce a wide range of low volume lines as well as make and sell a lot of pies and lamingtons, they want to develop their production lines, which involve a lot of extra machinery set ups and material handling. These changes would directly lead to the changes in cost structure of the company. In the past, the cost structure of company seems very simple; absorption costing system is easy applied to this structure. It is an inventory valuation and costing model that includes all manufacturing costs. For example, one is the direct material, those materials that become an integral part of a finished product and can be conveniently traced into it. ...read more.

They adopt some computer controlled machines and replace a lot of direct labor operations. They also start to produce some specific new products, such as Danish pastries, donuts and vanilla slices. These changes bring some troubles in cost calculation. That is because the new products are very complex to produce; they can not be produce in large volume. In production process, a lot of activities are required to produce the new products, and these activities will definitely cause some costs in the process. These costs would directly lead to high production overheads. Under the existing costing system of the company, the high production overheads brought by new products would be distributed to every product equally. So the cost of old products like lamington would be calculated higher than the actual cost, and oppositely, the cost of new products like Danish pastry would be calculated lower than the actual cost. We can use a simple example to explain that. Suppose each lamington contains following costs: direct material $1, direct labor $2. The total production overheads are $2000. Under the existing costing system, based on direct material, producing 1000 lamingtons, the overhead cost per lamington should be calculated as follow: OAR = Total overhead cost / Total direct material = $2000/1000 = $2 So the total cost of each lamington is 1+2+2=$5 If the company produces 1000 Danish pastries, each Danish pastry contains following costs: direct material $1, direct labor $2, the production overheads is $4000 based on direct material. ...read more.

Then, as sum up, ABC doesn't eliminate or change costs, it provides data about how costs are actually consumed. In this example, if Santa Cakes Pty Ltd wanted to reduce costs using traditional data that would have to decrease salaries, or decrease costs of supplies. They don't know enough to change the equipment or overhead costs. Using ABC data you can see that it costs the same to paint and inspect the door. Absorption costing system is inaccurate in the way that they allocate costs. Large batch or high volume products and services typically incur 50-200% LESS overhead than they are assigned. Small batch or low volume products and services typically incur 200-1000% MORE overhead than they are assigned. This means that products and services that are considered highly profitable may in fact be profit eaters. This inaccuracy is becoming more and more critical as companies move toward customer-defined products and services (which often mean a batch size of one). Thereby, in order to correctly associate costs with products and services, ABC assigns cost to activities based on their use of resources. It then assigns cost to cost objects, such as products or customers, based on their use of activities. This information assists company in making decisions about pricing, outsourcing, capital expenditures and operational efficiency. Therefore it could overcome the deficiencies inherent in the existing costing system. ?? ?? ?? ?? March. 2005 ...read more.