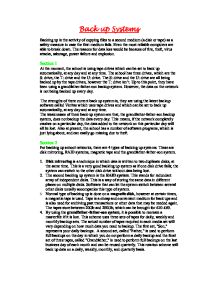 The tapes store between 20Gb and 200Gb, which can be brought for �10-�60. 4. By using the grandfather-father-son system, it is possible to recreate a masterfile if it is lost. This scheme uses three sets of tapes for daily, weekly and monthly backup sets. The actual number of tapes required in each media set will vary depending on how much data you need to backup. The first set, "Son," represents your daily backups. A second set, called "Father," is used to perform full backups on the day in which you do not perform a daily backup and the final set of three tapes, called "Grandfather," is used to perform full backups on the last business day of each month and can be reused quarterly. This rotation scheme will back up data on a daily, weekly, monthly, and quarterly basis. Out of all the types of back-up mediums, I personally feel that the tape drive is the best one to back up a school network. ...read more.

Backup medium: The most appropriate medium for backing up a school network is using DAT, and by using the grandfather-father-son backup system. The capacity of the tape, depends on, the volume of data to be backed up, the expense and the convenience of the medium. Dos and Don'ts After backing up the data, do not leave the backup tapes lying around, as they can be stolen very easily. Secondly, do not leave the backup disks near the computer, because if the computer is stolen, then there is a very big chance they will take the backup disks with them. Thirdly, do not leave the disks, lying around or by keeping it in drawers. You should at least have more than one backing up tape, and at least one of them should be left far away from the main system, and preferably in another site. Also, if the back up data is expensive then the school should buy a fireproof and a waterproof safe, where the backups tapes can be safely placed incase of an emergency such as a fire and they wouldn't need to be transported to another site. ?? ?? ?? ?? ...read more.