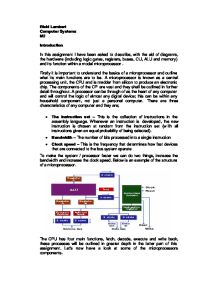 In this assignment I have been asked to describe, with the aid of diagrams, the hardware (including logic gates, registers, buses, CU, ALU and memory) and its function within a model microprocessor.

Firstly it is important to understand the basics of a microprocessor and outline what its main functions are to be. A microprocessor is known as a central processing unit, the CPU and is madder from silicon to produce an electronic chip. The components of the CP are vast and they shall be outlined in further detail throughout. A processor can be through of as the heart of any computer and will control the logic of almost any digital device; this can be within any household component, not just a personal computer. There are three characteristics of any computer and they are;

To make the system / processor faster we can do two things, increase the bandwidth and increase the clock speed. Below is an example of the structure of a microprocessor. 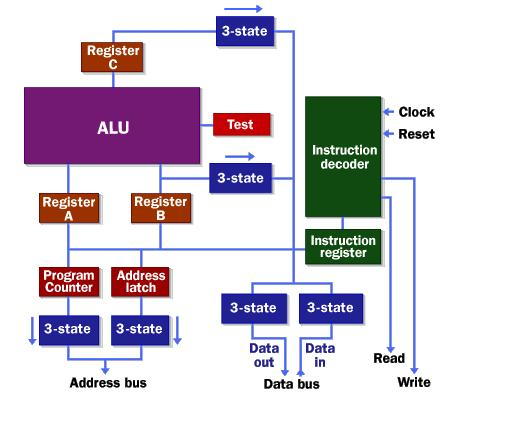 The CPU has four main functions, fetch, decode, execute and write back, these processes will be outlined in greater depth in the latter part of this assignment. Let’s now have a look at some of the microprocessors components.

Logic gates aid the computer in receiving results dictated by a set of components and rules. The logic gate has several inputs but only one output dependant on the various inputs. It is important to remember tat computers only work in values of zeroes and ones, zero representing low voltage and one representing high voltage. To make the computer system function, by processing useful information these binary values need to be converted in to meaningful logic.

There are several differing types of logic gates and they are;

Adding numbers in a computer system is often done on the processor in the Arithmetic Logic Unit, this will be described later. But if we wish to use binary values we can sue a form of logic gate called an adder, there are two types of adder, half and full. The half adder is a logical circuit that performs an addition operation. The half adder produces a sum and a carry value which are both binary digits. It uses the following equation;

Here is the logic table

Below can be seen the representations used for the logic gates in drawing form. 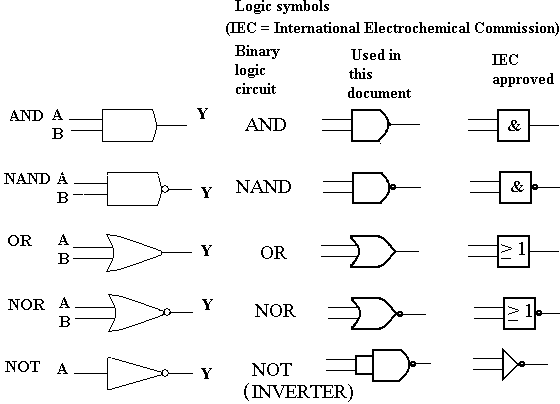 Computer processors are made up of many temporary storage areas known as registers. They are not part of the computers memory but are considered to be an additional storage location that helps in maintaining fast speeds. These registers form the most common of computer architecture and operate on the principle of moving data from the main memory, operating them, and then sending them back, giving them a memory location. This is a form of volatile storage.

There are many types of registers found within the CPU but the following are the most common;

It is possible to see that the biggest link to the registers in the CPU is memory. This is because processes come to and from the memory in order to be processed. Each of these registers therefore plays a large part in the way in which the fetch decode and execute cycle takes place.

A bus system is a series of interconnecting electrical devices which carries signals around a computer system. It is important to break the bus system down into smaller segments as information travels on a number of routes to a specific destination. Below ca be seen the breakdown of the bus system;

It is possible to categorise busses in to certain functions and there are three main types of bus present within a computer system, the three differing bus types are as follows

Address Bus – The address bus is used to connect to the CPU to exact places in the memory locations. The number of wires varies either 32 or 64, the more wires that the bus connects means the more locations it can point to.

Data Bus – The data bus is used for the sending of information across a computer system. When the processor wishes to transmit or receive data it will set the address bus pins appropriately in order for the data bus to work effectively.

Control Bus – The control bus is extensive and is found at all parts of the computer system. It is present in the input output devices, main memory, disk space, and ultimately the CPU. The idea of the control bus is to manage the electrical signals and ensures that data will arrive efficiently in the order in which it was sent.

The way in which a bus can send information can be seen in two ways, they are Direct memory access and Bus Mastering. These two methods shall be described in more detail below.

Direct Memory Access – The idea behind direct memory access is to avoid the intervention of the processor allowing computer peripherals to communicate with the memory in order to read or write instruction sets.

Bus Mastering – This process is used to sufficiently increase the performance of the system. The bus takes the form of the processor communicating directly with other devices.

It can be said that the control unit is the brain within a brain. The CPU is in charge of all the system and is how it functions. But what is it that controls the CPU? This is the control unit. Depending on system setup and what processor is being used ultimately impacts on the control unit to be used.

The control unit is in charge of the Arithmetic logic unit which is in turn responsible for calculating arithmetic operations. It is considered a fundamental building block of the control unit of the micro processor.

Arithmetic logic units make up many of the worlds processors from very basic to very complex systems. An example of this is the arithmetic logic unit within a watch, something that is always incrementing a certain digit by one every time a second elapses.

Instruction Decoder – When processing information the CPU needs to decode it. This is controlled by the control unit. Each process contains what is known as opcode and the operand. The opcode is the data within the process and the operand is the way in which it should be processed. This information needs to be decoded by the CPU to be in an understandable form of data.

Programme Counter – The programme counter is a vital part of the CPU and is instrumental in how the processor can jump to the next process in the queue. When a process sis finished the programme counter will increment by one and therefore point to the next process to be done. This is ultimately dictated by the operating system, this is because the operating systems scheduling can vary, i.e.) first in first out, round robin and so on.

The memory used with in a computer micro processor is called cache and this memory type comes in differing levels. The idea of the cache is to reduce the time used to access memory by storing the most commonly used functions and commands within it. Without the cache every time the CPU requested data it would have to go to the main memory to get it. This is very in efficient.

Computers, as I have said consist of two levels of cache and they are level one and level two. Level one however is external to the CPU. Level 2 has greater size meaning that more instructions can be stored within them. The problem with this is that that the more instructions that get stored within means a harder job for the processor to find specific ones. It is still however far greater in efficiency than going directly to the main memory and searching and returning from there.

Related AS and A Level Computer Science Skills and Knowledge Essays