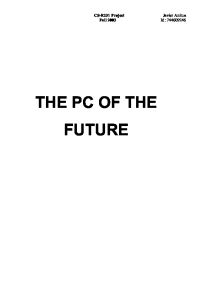 THE PC OF THE FUTURE MAJOR DEVELOPMENTS IN THE HARDWARE AND SOFTWARE Introduction To the present computers only they have left two generations more to be able to continue being at the same time smaller and more powerful, the two generations that calculate that they allow the present technologies of miniaturization of its basic circuits. The perspective of not being able to maintain this tendency does not please anything to the physicists and computer science technicians, reason why, supported by the great companies of the sector, are looking for new approaches completely for the computers of the future. No of these approaches appears simple but all are suggestive, although to risk to imagine one of these computers - molecular, quantum or from DNA is still premature. Whatever it buys a computer nowadays knows that it will be obsolete in a pair of years. Now we give by seated the inexorable increase of the power of the computers. But that cannot follow eternally thus, at least, if the computers continue being based on the present technologies. Gordon Moore, cofounder of Intel and one of gurus of the technology of the information, anticipate that the existing methods of miniaturization only will offer two generations more of computers before its capacity is exhausted. In 1965, Moore made a prediction that was confirmed with amazing precision in the three following decades: the power of the computers would duplicate every 18 months. This increase has been due mainly to the more and more small size of the electronic components, so that every time a microprocessor or chip can be introduced more of them in. A modern chip of only half square centimeter contains many million tiny electronic components like the transistors. Each one measures less than one micron of diameter, more or less the hundredth part of the thickness of a human hair. These components are done basically of silicon, that the electricity leads, and of silicon dioxide, that is an insulator. ...read more.

So that only it is necessary to separate the DNA fibers that they have codified the best solution. This can be done using biotechnological methods that recognize specific short sequences of the bases of a fiber of ADN. This procedure is not more than a slightly little orthodox form to find a solution: in the first place, to find all the solutions possible and later to use operations logics to choose the correct one. But, as everything happens parallelly - all the possible solutions are created and examined to the same time the process it can be very fast. The calculation by DNA has been demonstrated in principle, but it has still not been proven that solves problems that a conventional computer cannot solve. It seems more apt for a quite specific set of problems, like the minimization and the codification that like method of calculation for questions of all type. The quantum world Already in the Sixties, some computer science scientists noticed themselves of where he took the miniaturization to them: towards the quantum kingdom, where the non-logical rules of the quantum mechanics govern the behavior of the matter. As the conventional devices of the circuits become smaller, the quantum effects become a more and more important aspect of their behavior. It could be feasible, were asked, turn this possible complication an advantage? This suggestion gave fruit in the Eighties, when the physicists began to observe kindly how he could operate a computer under the influence of the quantum mechanics. What they discovered was that it could win enormously in speed. The crucial difference between processing information in the quantum world and the classic one is that first he is not black and white. In a classic computer, all the bits of information are or a thing or another one: or a 1 or a 0. But a quantum bit, qubit, can be a mixture of both. ...read more.

The competition which they can exert certain companies of little is going to be worth before this movement which it is essential for the technologies based on the side of the servant, and will have to enter itself in him, since it has made IBM and Sun to begin to include/understand his potential and to remove benefit from it. To put a simile, we imagine that the community of doctors and medicine investigators worldwide worked in network sharing their knowledge at any moment of the day and received as it compensates the solution at the moment to all the problems that appeared to them. With this system many of the present diseases would be already for a long time eradicated. In addition, in this example, the professionals with great tied pays to policies of maximum secret in the laboratories of investigation little would have to say before the greater force than she acquires the movement developed by the Network and that the knowledge has its base in sharing. Those that the difference between languages and free development systems like PHP know about, ZOPE, Perl, etc know well until where it is possible to be arrived with the free code. However, those that only know proprietary and closed technologies hardly will be able to get to watch the future, since they go to a technological slavery. Conclusion Computer science is a complex science but of which people create. Much people do not know that it is a science with two branches different one from the other, but employees. The architecture of the computer and software to be able to use it are very important. But all their possible uses are so many, that specialists are needed, like in the medicine, of each one of their parts. There per 1947, when the transistor was invented, and when Jaquard (1804) designed a loom that performed predefined tasks through feeding punched cards into a reading contraption; nobody imagined how quickly that it would take to get the nowadays supercomputers. Resources http://www.thocp.net/software/software_reference/introduction_to_software_history.htm http://www.softwarehistory.org/index.html http://www.intel.com/research/silicon/mooreslaw.htm http://www.libredebate.com/doc/doc199911070002.html http://www.elrinconcito.com/articulos/cibernetica/cibernetica.htm http://www.salon.com/tech/special/opensource/ http://www.ciberperiodismo.net/gorka/noticias/63/notiimpr CS-E231 Project Javier Anitua Fall 2003 Id: 744609246 ...read more.