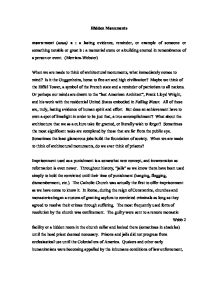 Hidden Monuments mon�u�ment (noun) a : a lasting evidence, reminder, or example of someone or something notable or great b : a memorial stone or a building erected in remembrance of a person or event. (Merriam-Webster) When we are made to think of architectural monuments, what immediately comes to mind? Is it the Guggenheim, home to fine art and high civilization? Maybe we think of the Eiffel Tower, a symbol of the French state and a reminder of patriotism to all nations. Or perhaps our minds are drawn to the "last American Architect", Frank Lloyd Wright, and his work with the residential United States embodied in Falling Water. All of these are, truly, lasting evidence of human spirit and effort. But does an achievement have to own a spot of limelight in order to be just that, a true accomplishment? What about the architecture that we as a culture take for granted, or literally wish to forget? Sometimes the most significant tasks are completed by those that are far from the public eye. Sometimes the least glamorous jobs build the foundation of society. When we are made to think of architectural monuments, do we ever think of prisons? ...read more.

The majority of the new architecture focused on security and expense. Grilles (iron/steel bars) became extremely popular because of their small expense and the fact that they allow guards to see inside the cells. Architects also designated three different types of cells: outside, semi-inside, and inside. Inside cells are the most popular with designers and guards due to their ease of observation and, once again, small expense. They are small cubes enclosed on three or four sides by grillwork or cement blocking, and always with a grille front, removing all forms of privacy. They have no outside view or windows, making escape next to impossible and obliterating any concept of night and day. Semi-inside cells also have grille fronts, but are separated Webb 4 from an external wall by a security corridor. This allows the inmates some natural light and returns a little sense of time. They are easy to guard, but increase the cost of building slightly. Outside cells are the least popular with jail keepers and designers because of their greater expense and higher probability of escape. They may sometimes have a grille front, but usually exist as rooms with doors, allowing the prisoner at least an illusion of privacy. ...read more.

This has rarely led to a decrease of respect from the inmates, however. Respect is shown where respect is given, and even the seemingly open layout of the design has not led to more frequent thoughts of rebellion. On the contrary, both escape attempts and actual escapes have been rarified. Although it is not perfect, it has shown itself to be a vast improvement over the cold, dehumanizing architecture of previous designs; certainly a step in the right direction. Repeat offenders make up the highest prison population in the United States. Let us hope that administrators look past the initial expense of improved prison design; instead viewing it as an investment, allowing architects to completely do their job in providing prison facilities that truly reform offenders and spare taxpayers the expense of repetitive prison stays. Looking back at the true definition of monument, what could be a better reminder of human spirit and ability than changed lives? What could be greater or more notable than a truly reformed individual? What more impressive event could the prison system present than a completion of a truthfully and ultimately effective penal sentence? As contradictory as it may sound, a completely effective prison is as much a monument to human spirit as is the Eiffel Tower. Being architects, we have the responsibility to make this happen. ...read more.