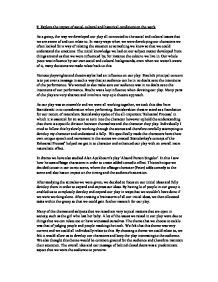 9. Explore the impact of social, cultural and historical conditions on the work

9. Explore the impact of social, cultural and historical conditions on the work As a group, the way we developed our play all connected to the social and cultural issues that we are aware of and can relate to. In many ways when we were developing our characters we often looked for a way of relating the situation to something we knew so that we could understand the emotions. The initial knowledge we had on our subject matter developed from things around us that we were influenced by, for instance the culture we live in. Our whole piece was influence by our own social and cultural backgrounds, even when we weren't aware of it, many decisions we made relate back to this. Various playwrights and theatre styles had an influence on our play. Brecht's principal concern is to put over a message in such a way that an audience can be in no doubt as to the intentions of the performance. We wanted to also make sure our audience was in no doubt as to the intentions of our performance. Brecht was a key influence when devising our play. ...read more.

A lot of the issues we raised in our play were due to things that we can relate too or have witnessed ourselves. The theme that we choose to tackle was that of judging people and people masking the truth. We felt that this theme was very current and we could all individually relate to this. By choosing a theme we could relate to, we felt it would allow us to develop our characters and keep the play interesting to the audience. We also thought this theme would be common ground for the audience and therefore maintain their attention. The overall idea and our message of behind closed doors was a predominant aspect that we want the audience to perceive. When we were first placed in our groups it was clear that we all wanted to give an equal input. When we initially discussed our ideas being in a group enabled us to come up with a wide range of varied thoughts and opinions. It also allowed us to discuss and critically analyse what would and wouldn't work as a group. Everyone in the group had a different skill to offer and we all had very different personalities which helped us devise a play that would appeal to the audience and also make it enjoyable for us to play. ...read more.

After deciding on the themes of our play we decided to think about the characters. My character came from the group simply brainstorming ideas of people we could use to go through the park. We wanted to steer away from the stereotypical characters and try to find ideas with more depth. When we thought of having someone who was in a wheelchair, we thought this would be a really clever character to challenge the audience with. Often when you see a disabled person you do assume their unhappy and feel sorry for them; however our character was quite simply the opposite. She wasn't disabled but merely liked the fact of getting attention from being in a wheelchair. On first impressions the character sounds particularly immoral however after the audience hear the monologue they find out the reasons why and learn more about the character. Our social and cultural backgrounds have shaped our drama and made an impact on the final play. When often discussing our ideas as a group we referred to things we had previously learnt or plays we had seen. We did this almost all the time sub-consciously in lessons and even ideas that seemed good but somehow couldn't be shaped as part of the drama were in some way altered in order to fit in. ...read more.