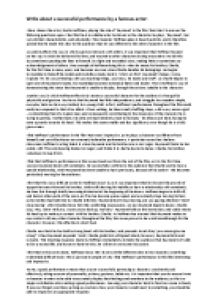 A successful performance by a famous actor- I have chosen the actor, Dustin Hoffman, playing the role of Raymond in the film Rain Man

﻿Write about a successful performance by a famous actor: I have chosen the actor, Dustin Hoffman, playing the role of ?Raymond? in the film ?Rain Man? to answer the following questions upon. I feel that he is a suitable actor to discuss as the character he plays, ?Raymond?, has very distinct characteristics, and physicality. The character Hoffman plays is heavily autistic, and is therefore pivotal that he made this clear to the audience that he was different to the other characters in the film. As autism affects the way in which a person interacts with others, it was important that Hoffman focused on the way in which he delivered his lines, and reacted to other characters during encounters. He did this by sometimes speaking the lines to himself, in a light and mumbled voice, making little or sometimes no acknowledgement of others. One example of Hoffman doing this is when he meets his brother, Charlie, for the first time in many years, and becomes nervous when Charlie handles his belongings. ...read more.

I find that Hoffman?s performance in this scene stands out from the rest of the film, as it is the first time you see Raymond bond with somebody. He successfully confirms to the audience that Charlie and he have a special relationship, which Raymond has been unable to have previously, because of his autism - this becomes particularly moving for the audience. I feel that this was a difficult scene for Hoffman to act in, as it was important that he showed the growth of rapport between him and his brother, whilst still showing his inability to have a relationship with somebody. He does this through briefly becoming distracted at the beginning of the dance. Hoffman begins to drift off, and look at other parts of the room, as if he has become preoccupied, and eventually stops moving his feet, as his brother had told him to. Charlie tells him; ?Raymond don?t stop moving, are you paying attention? Don't stop moving?. After Charlie shows him this comforting reassurance, we see Raymond begin to dance. ...read more.

You must ensure you practice enough, but never too much. Over rehearsing can lead to stress on stage, and consequently mistakes. Don?t just learn your own lines, learn the lines of those around you ? if anyone makes a mistake, you are then able to get them back on track. Once on stage, it is important that you have confidence in your ability; if you don?t, your character can become less convincing for the audience, therefore making your performance less believable. Committing to your character is also a pivotal part in creating an accurate performance. If something doesn?t go to plan, for example, you trip over, react as your character rather than yourself, this way, the audience may think it is part of the performance. Finally, take time for the other characters; you don?t have to be the main role to make an impact on the audience. Sharing the limelight shows your understanding for other characters, and gives others a chance to showcase their acting skills. Once these things are all taken into account, I believe you are able to create a successful performance. ...read more.