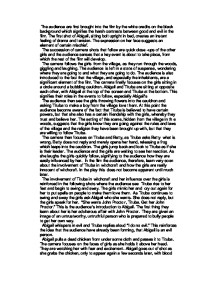 The audience are first brought into the film by the white credits on the black background which signifies the harsh contrasts between good and evil in the film. The first shot of Abigail, sitting bolt upright in bed, creates an instant feeling of drama and tension. The expression on her face suggests an element of certain mischief. The succession of camera shots that follow are quick close-ups of the other girls and the audience senses that a key event is about to take place, from which the rest of the film will develop. The camera follows the girls from the village, as they run through the woods, giggling and laughing. The audience is left in a state of suspense, wondering where they are going to and what they are going to do. ...read more.

The camera then focuses on Tituba and Betty, as Tituba asks Betty what is wrong. Betty does not reply and merely opens her hand, releasing a frog which leaps into the cauldron. The girls jump back and look to Tituba as if she is their leader. The audience and the girls are waiting to see her reaction. As she laughs the girls quickly follow, signifying to the audience how they are easily influenced by her. In the film the audience, therefore, learn very soon about the involvement of Tituba in witchcraft and how the girls are really innocent of witchcraft. In the play this does not become apparent until much later. The involvement of Tituba in witchcraft and her influence over the girls is reinforced in the following shots where the audience see Tituba rise to her feet and begin to swing and sway. ...read more.

This reinforces the idea that the audience have already been forming, that Abigail is an evil person. Abigail pulls a dead chicken from under some cloth and passes it to Tituba. The camera focuses on the faces of girls as she holds it above her head. They are watching her with fear and excitement. Abigail goes out of shot as she grabs the chicken, only to appear again a few seconds later, with blood on her hands and face. This is symbolic of the role Abigail plays in the film. She is ultimately responsible for the deaths of so many people and yet shows no emotion or regret of her actions. Also symbolic is the hysterical reaction of the girls. They run around, shouting screaming and start to strip off their clothes. It is the hysterical, unreasoned action of the villagers to the accusations of witchcraft that allow the witch hunts and executions to take place. ...read more.