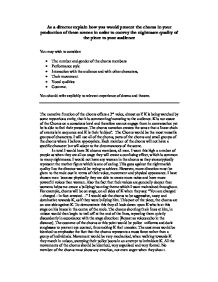 As a director explain how you would present the chorus in your production of these scenes in order to convey the nightmare quality of the piece to your audience You may wish to consider: * The number and gender of the chorus members * Performance style * Interaction with the audience and with other characters, * Their movement * Vocal qualities * Costume. You should refer explicitly to relevant experience of drama and theatre. The narrative function of the chorus offers a 3rd voice, almost as if K is being watched by some mysterious entity, that it is commenting/narrating to the audience. K is not aware of the Chorus on a conscious level and therefore cannot engage them in conversation yet he is able to feel their presence. The chorus narration creates the sense that a linear chain of events is in sequence and K is their 'subject'. The Chorus would be the most versatile groups of characters. I will use all of the chorus, parts of the chorus and small groups of the chorus where I believe appropriate. Each member of the chorus will not have a specific character but will adapt to the circumstances of the scene. In total I would have 20 chorus members, all men. ...read more.

All the movements of the chorus should be identical, very organised and very formal. No member of the chorus must show any emotion, not even anger when they shout. The script divides the chorus into 5 sections. I would have each section made up of 4 men. This means that when each section is talking, no section appears to have any more significance than the others. For variety though, and to make the choral parts more interesting, I will focus on each groups movements and costume, which relevantly reflect the themes of the piece. Section one: Judges, Section two: police, section three: prisoners, Section four: businessmen, section five: chimney sweeps. Thus giving each section of the chorus a character/angle. This selection of "society" is unbalanced and based on the theme of Law, criminals and society. The unbalanced nature of the representations is suitable for the nightmare quality. This is reminiscent of a production of Antigone I participated in. The chorus was used in a similar way to reflect the people of the town, by giving them a group voice gave them more power than single citizens. The two productions use of chorus parallel each other in the respects that they represent aspects of society and they indirectly influence the character of which the piece focuses on...K/Antigone. ...read more.

K, able to hear what is being said but has no control over the voices, as they ultimately control him. He is their puppet that they play with, taunt. The rest of the chorus are moving from side to side of the stage very quickly, running. This time, the background chorus are dressed in black robes that flow of their bodies as they run. This is to make them more difficult to see and to give the effect that they all merge into each other. K nor the audience will be able to keep track of one individual. The 5 with K, speaking the dialogue are still in their previous costumes, one form each section. A production that this idea comes from was called "Popstar", where certain characters would take role as the subjects conscience and question, tease them. They would ask them what they were going to do and simply represent different ideas the subject had. This taunting eventually lead to the subjects breakdown and was very unpleasant, similar to K's experiences. To make the piece more nightmarish, the Chorus should follow the general rules that they are not nice to K, they bully, tease him, look down upon him and think he is stupid. They can see him but he cannot find the source of this negativity which frustrates him. ...read more.