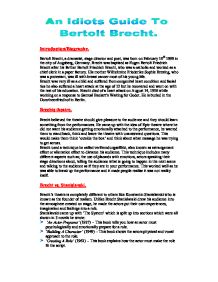 Introduction/Biography. Bertolt Brecht, a dramatist, stage director and poet, was born on February 10th 1898 in the city of Augsberg, Germany. Brecht was baptised as Eugen Bertolt Friedrich Brecht after his farther Bertolt Friedrich Brecht, who was a catholic and worked as a chief clerk in a paper factory. His mother Wilhelmine Friederike Sophie Brezing, who was a protestant, was ill with breast cancer most of his young life. Brecht was very ill as a child and suffered from congenital heart condition and facial tics he also suffered a heart attack at the age of 12 but he recovered and went on with the rest of his education. Brecht died of a heart attack on August 14, 1956 while working on a response to Samual Beckett's Waiting for Godot. He is buried in the Dorotheenfriedhof in Berlin. Brechts theatre. Brecht believed the theatre should give pleasure to the audience and they should learn something from the performances. ...read more.

Unlike Brecht Stanislavski drew his audience into the atmosphere created on stage, he made the actors put their own experiences, imagination and feelings into a role. Stanislavski came up with 'The System' which is split up into sections which were all shown in 3 novels he wrote: * 'An Actor Prepares' (1937) - This book tells you how an actor must psychologically and emotionally prepare for a role. * 'Building A Character' (1949) - This book shows the actors physical and vocal approach to the role. * 'Creating A Role' (1961) - This book explains how the actor must make the role fit the script. 'The System' is the opposite of 'Epic Theatre' but they both worked very effectively and they both achieved there targets and beliefs. Some of Brechts plays. Here are just some of Brechts plays; * Drums In The Night (1918) ...read more.

everyone gets paid the same) during the time this play was written, therefore he shows capitalism (an economic system where people own there own money and property) in a bad way by making Mother Courage a capitalist. Theory or plays?? Brecht theory is more important now than the actual plays are, this is because the theory can still be used in theatre today whereas the plays are now dated and would not fit in with today's society. However the plays can still be used as a guide but would need to be modified. Conclusion I like Epic theatre because it gives you the opportunity to try something completely different from all other genres and leaves you thinking about it afterwards. However if it is not explained to someone correctly or they don't know what it is then it can be very hard to understand and may leave many people confused and asking the wrong questions such as, why the techniques were used and what the whole point of them was, instead of questions about the performance. By Zoe Barnes. Word count: 799 ...read more.