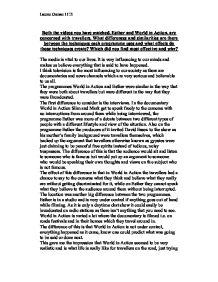 Both the videos you have watched, Esther and World in Action, are concerned with travellers. What differences and similarities are there between the techniques each programme uses and what effects do those techniques create?

Both the videos you have watched, Esther and World in Action, are concerned with travellers. What differences and similarities are there between the techniques each programme uses and what effects do those techniques create? Which did you find most effective and why? The media is vital to our lives. It is very influencing to our minds and makes us believe everything that is said to have happened. I think television is the most influencing to our society as there are documentaries and news channels which are very serious and believable to us all. The programmes World in Action and Esther were similar in the way that they were both about travellers but were different in the way that they were Broadcasted. The first difference to consider is the interviews. In the documentary World in Action Slim and Mark get to speak freely to the cameras with no interruptions from around them while being interviewed, the programme Esther was more of a debate between two different types of people with a different lifestyle and view of the situation. ...read more.

As it is only a daytime chat show it could easily be broadcasted on radio stations as there isn't anything that you need to see. World in Action is varied a lot where the documentary is filmed i.e. on roads festivals and in their homes which they travel around in. The difference of this is that World in Action is not under control, everything happened as it came, know one could predict what was going to be said or done next. This gave me the impression that World in Action seemed to be very realistic and is what life is really like for travellers on the road, just trying to find a suitable place to stay for a few nights but then getting forced to move on all the time. The way the music was used brought out another difference Esther seemed to be very jazzy, happy, and cheerful and gives you the feeling that someone is there to listen to you and give you advice. ...read more.

It is shown straight after soaps so they can guarantee that a numerous amount of people would be watching it. The effect of this is that they try to show everyone the same programme (World in Action) at a time that the majority of people would be watching television so that our society get a one and only view on how travellers live, this is one in which I see the media is trying to choose our thoughts and feelings on the subject of travellers. In conclusion I thought that World in Action was the most interesting programme out of the two that I saw. I found the most effective to be World in Action as it showed the truth about them, what they go through and what conditions they live in. The assignment has shown me that travellers are really just looking for freedom and peace and they do go through a lot just to get that pleasure that they've been fighting for, but people protest against their choices and disrupt their innocence. ?? ?? ?? ?? Lauren Osman 11T1 ...read more.