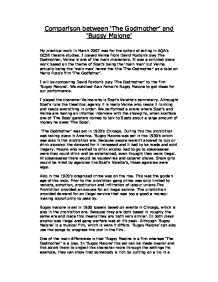 Comparison between 'The Godmother' and 'Bugsy Malone'

Comparison between 'The Godmother' and 'Bugsy Malone' My practical work in March 2007 was for the option of acting in AQA's GCSE theatre studies. I played Velma from David Foxton's play The Godmother. Velma is one of the main characters. It was a scripted piece work based on the theme of Spat's being the 'main man' but Velma actually being the 'main man' hence the title 'The Godmother' as a take on Mario Puzo's film 'The Godfather'. I will be comparing David Foxton's play 'The Godmother' to the film 'Bugsy Malone'. We watched Alan Parker's Bugsy Malone to get ideas for our performance. I played the character Velma who is Spat's Velatta's sercretairy. Althought Spat's runs the theatrical agency it is really Velma who keeps it running and keeps everything in order. We performed a scene where Spat's and Velma are having an informal interview with the showgirls, when scarface one of 'The Boss' gansters comes to talk to Spats about a large amount of money he owes 'The Boss'. ...read more.

Bugsy malone is set in 1930 loosely based on events in Chicago, which is also in the prohibition era. Because they are both based in roughly the same era and place this means they are both very similar. In both plays alcohol was illegal and gang warfare was at it's peak. Although 'Bugsy Malone' is a musical film, which is were it differs. 'Bugsy Malone' can also use the songs to progress the plot in the film. One of the main differences is that 'Bugsy Maolne is a film whereas 'The Godmother' is a play. In 'Bugsy Malone' the set can be made clearer and this able's them to project the character more through the settings fro example, they can show that somebody is rich by putting on a lilo in a swimming pool with a big house behind them. However in a play they cannot do this as this means that they would have to make lots of different sets for each of the characters to explain and develop the characters personality and characteristics. ...read more.

They also have a leading lady,the main difference in this play as they have different roles whereas the other characters all play very simialar roles. In 'Bugsy Malone' the leading lady is Tahlula and she helps Bugsy Malone to rebel against 'The Boss' but in 'The Godmother' the leading lady is Velma and she instead of assisting Spat's she is more the brains and the main person of the pair to rebel against 'The Boss'. In the rehersals I think that we did not use our time to the full extent that we could of to get the best out of the time we were given. When the group were all focused I think that we did really well at going throught our lines and helping each other to get into our characters through our interactions with each other. For our perfermance because it was only a short scene and some of us did not have many lines we decided that we would introduce oursleves and tell the audience a little about our charcters and our history in a monolouge. By Isabelle Mercer ...read more.