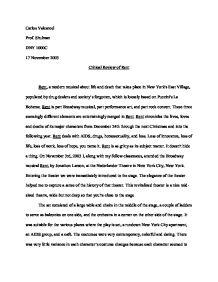 Carlos Valcarcel Prof. Shulman DNY 1000C 17 November 2003 Critical Review of Rent Rent, a modern musical about life and death that takes place in New York's East Village, populated by drug dealers and society's forgotten, which is loosely based on Puccini's La Boheme. Rent is part Broadway musical, part performance art, and part rock concert. These three seemingly different elements are entertainingly merged in Rent. Rent chronicles the lives, loves and deaths of its major characters from December 24th through the next Christmas and into the following year. Rent deals with AIDS, drugs, homosexuality, and loss. Loss of innocence, loss of life, loss of work, loss of hope, you name it. Rent is as gritty as its subject matter. It doesn't hide a thing. On November 3rd, 2003 I, along with my fellow classmates, attended the Broadway musical Rent, by Jonathon Larson, at the Nederlander Theatre in New York City, New York. Entering the theater we were immediately introduced to the stage. The elegance of the theater helped me to capture a sense of the history of that theater. This revitalized theater is a nice mid-sized theatre, wide but not deep so that you're close to the stage The set consisted of a large table and chairs in the middle of the stage, a couple of ladders to serve as balconies on one side, and the orchestra in a corner on the other side of the stage. ...read more.

They feel betrayed by life in general in that they are struggling so hard to accomplish nothing. Roger is bitter at love because we later find out that his girlfriend committed suicide after finding out that they both have AIDS. Roger captures their general separation to the world around them in the quote, "How can you connect in an age/Where strangers, landlords, lovers/Your own blood cells betray?" At the end of the score, they feel a surge of power shown through the entire company dancing around the stage and the increasing loudness of the vocals. "Rent" ends in a way that seems to be hopeful for Mark and Roger because their attitudes grow more optimistic. When the actors and actresses return to the stage for "Seasons of Love," there is automatically a positive spirit with both the audience and the cast members. The cast came out smiling, possibly in anticipation of the audience's roaring response to this score. This song illustrates the importance of love in each person's life on stage, and even in the audience. I think it speaks to so many people in the audience because everyone can relate to the idea of love. I felt like there was a great deal of feeling and emotion put into this song. ...read more.

As for the audience at the Nederlander Theatre, I can attest that most if not all walked out entertained and elated on the performance the cast gave. Rent has made theatrical history, and it deserves most of the praise it has gotten, it is quite worth seeing this groundbreaking musical. You will learn something about yourself, if not you'll have a fun time enjoying some really good performances. I walked out of the theater with a positive attitude towards the performing arts and will continue to enjoy the arts from here on out. I give Rent two thumbs up! Rent Written by Jonathan Larson (Book, Music, Lyrics) Directed by Michael Greif Cast: Ryan Link - Roger Davis Sebastian Arcelus - Mark Cohen Mark Richard Ford - Tom Collins Philip Dorain McAdoo - Benjamin coffin III Kenna J. Ramsey - Joanne Jefferson Andy Senor - Angel Schunard Krystal L. Washington - Mimi Marquez Cristina L. Fadale - Maureen Johnson Ensemble: Kendra Kassebaum Todd E. Pettiford Frenchie Davis Colin Hanlon Justin A. Johnston Shaun Earl Mayumi Ando Choreography - Marlies Yearby Music Supervision - Tim Weil Set Design - Paul Clay Costume Designer - Angela Wendt Lighting Design - Blake Burba Producer 1 - Jeffrey Seller Producer 2 - Kevin McCollum Producer 3 - Allan S. Gordon ...read more.