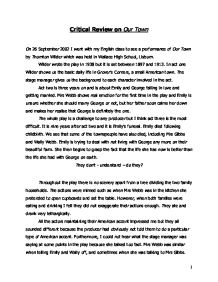 Critical Review on Our Town.

Critical Review on Our Town On 26 September 2002 I went with my English class to see a performance of Our Town by Thornton Wilder which was held in Wallace High School, Lisburn. Wilder wrote the play in 1938 but it is set between 1897 and 1913. In act one Wilder shows us the basic daily life in Grover's Corners, a small American town. The stage manager gives us the background to each character involved in the act. Act two is three years on and is about Emily and George falling in love and getting married. Mrs Webb shows real emotion for the first time in the play and Emily is unsure whether she should marry George or not, but her father soon calms her down and makes her realise that George is definitely the one. The whole play is a challenge to any producer but I think act three is the most difficult. ...read more.

Furthermore, I could not hear what the stage manager was saying at some points in the play because she talked too fast. Mrs Webb was similar when telling Emily and Wally off, and sometimes when she was talking to Mrs Gibbs. Timothy Taggart played the part of Doctor Frank Gibbs. He was made to look like a typical doctor wearing a dark suit with a white shirt. He was always cleanly shaven and dressed neatly. He portrayed the character really well, giving the audience the impression that he was a sincere but very pleasant man. Claire Lorimer played Mrs Julia Gibbs. She was dressed in a long flaired skirt and a blouse to indicate the 'motherly' look. Claire fitted the mother character very well because of her small, round figure. Peter Noble played George Gibbs. He wore trousers, a shirt and a waistcoat. In act one he was just a boring boy next door who quite fancied the girl he had lived beside all his life but in act two his notion of her turned into a mature love. ...read more.

was played by Richard Hunter; he featured only in acts one and three. He wore clothes similar to George, trousers, shirt and a waistcoat. Cara Curran played the Stage Manager. She wore black trousers and a black blouse. I think the reason for her being dressed in black was so she could watch the play on stage without being noticed by the audience. She played the part well and she shocked the audience because everyone expected the stage manager to be male. She handled the role of the stage manager well. It was a difficult role because she had to act other characters too, such as a passer-by, Mr Morgan and the minister. I thought she did not emphasize some of her lines enough though, because it sounded like she just rhymed them off. Before the play started, I did not think it would be a successful production but the Wallace High's performance surprised me. The actors performed to a high standard and I enjoyed it thoroughly. 1 ...read more.