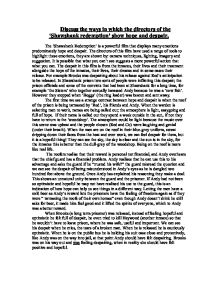 Discuss the ways in which the directors of the 'Shawshank redemption' show hope and despair.

Discuss the ways in which the directors of the 'Shawshank redemption' show hope and despair. The 'Shawshank Redemption' is a powerful film that displays many emotions predominately hope and despair. The directors of this film have used a range of tools to highlight these emotions, they are shown by: camera techniques, lighting, imagery and suggestion. It is possible that what you can't see suggests a more powerful action that what you can. The despair in this film is from the inmates, their lives and their treatment alongside the hope of the inmates, their lives, their dreams and in some cases their release. For example Brooks was despairing about his release against Red's anticipation to be released. In Shawshank prison two sorts of people were inflicting this despair; the prison officials and some of the convicts that had been at Shawshank for a long time, for example 'the Sisters' who together s******y harassed Andy because he was a 'new fish'. However they stopped when 'Boggs' (the ring leader) was beaten and sent away. The first time we see a strange contrast between hope and despair is when the roof of the prison is being tarmaced by 'Red', his friends and Andy. When the warden is selecting men to work, names are being called out; the atmosphere is light, easygoing and full of hope. If their name is called out they spend a week outside in the sun, if not they have to return to the 'woodshop'. ...read more.

Brooks was on his way out and was feeling despairing, when in reality she should have felt positive and hopeful. His first impressions lead him to depression "the world is in a hurry", the cars are too fast for him and the duty manager at the shop he worked in didn't like him. He fed the birds in the park as an outlet; he kept hoping that Jake (the bird he looked after in Shawshank) would come while he was there. At that time Brooks needed familiarity and love. Brooks wanted to break his parole by committing crimes that will send him back to Shawshank, but he didn't want to kill anybody. Eventually his life and the gloomy bed sit and his new life become too much for him. Any hope he may have had turned to despair. So he hung himself to escape his depression and misery. One of the most uplifting and powerful scenes is when Andy receives a government grant, he unpacks second hand books and discovers some records as well. He had written hundreds of letters to achieve this, he never gave up hope and it all paid off. He intended to start a library- an action that would have an impact on everyone, not just him. He decided to take a risk and plays a classical piece over the loud speakers. He is aware that his actions would 'free' everyone but at a price. ...read more.

The warden never expected any worth from the inmates; he was miserable and had a bleak outlook on life. When Andy came to Shawshank, he was too hopeful and persistent for the wardens liking. I believe that the character of the warden thrived on despair but couldn't handle hope; therefore eliminated hope in any way possible. Just as we think that Andy has given up all hope he escapes, proving that Andy's hopeful spirit could not be defeated. I think that all of Andy's actions were to the benefit of his inmates. E.G. playing the music made the inmates feel freedom and helping Tommy pass his high school diploma so that he could look after his daughter. However most of Andy's actions backfired. For example he was given two months in the hold for playing the music and once Tommy passed his diploma he was shot. I think that the directors want the audience to subconsciously will Andy to keep persisting because if he had stopped his sustained hope could easily have turned to despair. Just like Brooks. At one point in the film Andy gave up hope but Red who seemed like a despairing character lifted his spirit and that is how he found the will power to escape. I also think that the voice of Red over the film brought out how hopeful Andy was and if the narrating voice wasn't there the audience could have missed the point of the story. NEVER GIVE UP HOPE. ...read more.