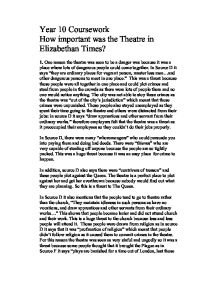 Year 10 Coursework How important was the Theatre in Elizabethan Times? 1. One reason the theatre was seen to be a danger was because it was a place where lots of dangerous people could come together. In Source D it says "they are ordinary places for vagrant person, master less men...and other dangerous persons to meet in one place." This was a threat because those people were all together in one place and could plot crimes and steal from people in the crowds as there were lots of people there and no one would notice anything. The city was not able to stop these crimes as the theatre was "out of the city's jurisdiction" which meant that those crimes were unpunished. Those people also stayed unemployed as they spent their time going to the theatre and others were distracted from their jobs: in source D it says "draw apprentices and other servant from their ordinary works." therefore employers felt that the theatre was a threat as it preoccupied their employees so they couldn't do their jobs properly. In Source D, there were many "whoremongers" who could persuade you into paying them and doing bad deeds. There were "thieves" who are very capable of stealing off anyone because the people are so tightly packed. This was a huge threat because it was an easy place for crime to happen. In addition, source D also says there were "contrivers of treason" and these people plot against the Queen. The theatre is a perfect place to plot against her and get her overthrown because nobody would find out what they are planning. So this is a threat to The Queen. In Source D it also mentions that the people tend to go to theatre rather than the church, "They maintain idleness in such persons as have no vocations, and draw apprentices and other servants from their ordinary works..." ...read more.

the top with cushions, which the poor people could not afford and therefore had to stand at the bottom and they all went in through different doors to get into the different class seats, so therefore the poor only saw the rich sitting at the top from the bottom and therefore did not get to interact with each other. Overall there is some evidence to show that the theatre acted as a social leveller because everyone came together in one big place and watched the same show. The fact that the Queen approved of it and that poor people went to it; it meant that it was a place that everyone went to. However, although they all sat together it was still not much of a social leveller because the poor and rich people sat separately and went in through different entrances because they all paid different prices to sit in different seats. 5. Many people criticized and disapproved of the Elizabethan theatre. This was because they felt that it was ungodly and an extravagant wastefulness as said in Source G "a continual monument of London's prodigality and folly." And it was also a place where all kinds of dangerous people went to as said in Source D "places for vagrant persons, masterless men...and dangerous persons to meet." and could discuss plots against the Queen and would not be noticed. It was also disapproved because it used to "draw apprentices and other servants from their ordinary works" as said in Source D so work didn't get done because the servants were in the theatre. Another reason why the theatre was disapproved was because unemployed people did not spend the time to find work and "maintained idleness in such persons". The theatre was also disapproved because it spread the plague as lots of people came together in one big place. We know this from source E as it says that the theatres had to be closed down because of the plague. ...read more.

However there were also other threats to Elizabeth and Elizabethan England. These included poverty and begging and the Spanish Armada, Begging and poverty was one of the threats to Elizabethan England. This was because lots of people were unemployed which meant that they didn't have enough money to support their families. This was a threat to England as it meant that lots of people were living in very poor conditions, so this helped spread the plague as people didn't have enough money for medicine and sanitation and therefore the theatre was not entirely a threat to England because of the plague. Another important threat to Elizabethan England was the Spanish Armada. This was a big threat to England because King Phillip of Spain was Catholic and wanted to turn England Catholic, so England was in threat because the official religion would have been changed again from Protestant to Catholic which would have caused riots and rebellion. However England had more advanced ships than Spain, so Spain wouldn't have been able to take over England so King Phillip joined forces with Mary Queen of Scots who also wanted England to be Catholic. England was now in threat of being taken over by the Spanish Armada and Queen Elizabeth was in threat of being captured by Spain or Mary Queen of Scots and assassinated. So Elizabeth was not as in much threat from assassination by the dangerous people in the theatre as from Mary Queen of Scots and the Spanish Armada. In conclusion, I think the theatre was a bit of a threat and the statement is somewhat true. I think this because the theatre spread the plague as lots of people came together in one place it caused bad behaviour and distracted people from their work. On the other hand, there were other more important threats to Elizabeth and Elizabethan England such as the Spanish Armada, Mary Queen of Scots and poverty and begging in England which were not caused by the theatre. ?? ?? ?? ?? ...read more.