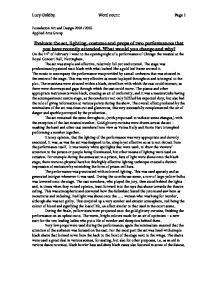 Evaluate the set, lighting, costume and props of two performances that you have recently attended. What would you change and why?

Foundation Art and Design 2004/2005 Applied Arts Group Evaluate the set, lighting, costume and props of two performances that you have recently attended. What would you change and why? On the 14th of February I went to the opening night of a performance of Chicago the musical at the Royal Concert Hall, Nottingham. The set was simple and effective, relatively full yet uncluttered. The stage was predominantly painted matt black with what looked like a gold leaf frame around it. The music to accompany the performance was provided by a small orchestra that was situated in the centre of the stage. This was very effective as music is played throughout and is integral to the plot. The musicians were situated within a black,tiered box with which the cast could interact; as there were doorways and gaps through which the cast could move. The pianos and other appropriate instruments were black, creating an air of uniformity, and it was a masterstroke having the accompaniment centre stage, as the conductor not only fulfilled his expected duty, but also had the role of giving information at various points during the show. The overall effect produced by the minimalism of the set was clean cut and glamorous, this very successfully complemented the air of danger and sparkle portrayed by the production. ...read more.

The technique of not always using props when actions would suffice was employed throughout the performance. Upon the introduction of Billy Flynn, more props were utilised in the form of decadent pink feather fans, out of step with the rest of the performance, but appropriate in showing the persona of the ruthless and largely false lawyer who claims that all he cares about is love...clearly not the romantic kind, but from his adoring clientele and the press. The costumes worn by both men and women were very stylized and, although reminiscent of the attire that would have been fashionable in the time period in which the show was set, they were very revealing. The costumes, for both men and women, were predominantly black and made from various materials; mesh, lace, leather and PVC, for different effects. To begin with, Roxie Hart, who was relatively innocent, wore a floaty, dropped waist dress that was almost knee length and fairly frumpy, whereas, by the finale, her clothing was more revealing, tighter fitting, and trimmed with transparent mesh. Accent colours of gold and silver were used in the costumes as the story progressed to represent character traits. Roxie's character in particular became stronger and more brazen, and therefore more adorned with colour. ...read more.

This gave a feeling of intimacy; the audience could empathise with the characters after seeing pictures of them with their partners or friends in everyday life situations. The viewers also benefited from reading correspondences between characters, as they acted out soliloquies, again giving character insight. Special effects in the form of pyrotechnics ............at the end, a gun was the weapon used to kill Dracula, minimal props - made use of suggestive acting - eg letting audience know that a ship is approaching by stating so Crucifix + steak. Specially effects - disappearances + blood COSTUME as set in modern day - all cast save Dracula + his sirens wore normal clothes - casual - trousers and t-shirts - skirts - what's in fashion. Dracula - black suited as expected - and made up - as are the women in red WHAT IS THE SIGNIFICANCE OF THE RED? Ruari Murchison has designed an elaborate set. It's constructed on different levels, incorporating a variety of slopes (a real challenge for the actors), and is dominated by two enormous angled 'computer' screens. On these, the audience can view the messages and pictures exchanged between estate agent Jonathan Harker and his girlfriend Mina - messages which never reach their destination, having been blocked by the computer-literate count. Now there's a twist to the tale. ?? ?? ?? ?? Lucy Goldby. Word count: Page 1 ...read more.