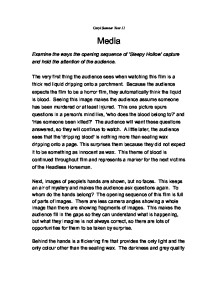 Examine the ways the opening sequence of 'Sleepy Hollow' capture and hold the attention of the audience.

Caryl Sumner Year 11 Media Examine the ways the opening sequence of 'Sleepy Hollow' capture and hold the attention of the audience. The very first thing the audience sees when watching this film is a thick red liquid dripping onto a parchment. Because the audience expects the film to be a horror film, they automatically think the liquid is blood. Seeing this image makes the audience assume someone has been murdered or at least injured. This one picture spurs questions in a person's mind like, 'who does the blood belong to?' and 'Has someone been killed?' The audience will want these questions answered, so they will continue to watch. A little later, the audience sees that the 'dripping blood' is nothing more than sealing wax dripping onto a page. This surprises them because they did not expect it to be something as innocent as wax. This theme of blood is continued throughout film and represents a marker for the next victims of the Headless Horseman. ...read more.

This instantly tells the viewer that someone has died, or perhaps is about to die since the same person that signed the document as a witness, signs it as the man that was supposed to have written the will. There is a huge close-up of the will with the camera sweeping down from the top of the page to the middle. As the camera moves down, so do the viewers' eyes as they read what is written on the page. There is a sort of sweeping sound effect mimicking the camera's movement. After the will has been signed, it goes back to the dripping sealing wax and then a seal is pressed down into it. There is, again, a close-up of the seal being used and the sound effect is repeated. Since these sound effects would not occur in real life, they emphasis to the audience that the particular event they are heard with must be very important. Emphasis is given on an audio level as well as a visual level. ...read more.

After various shots of the carriage, the camera stays where it is while it drives away and focuses on a scare crow with a pumpkin for its head. At this moment, the music in the background calms leaving singing voices. These voices are continually heard in the opening sequence, while the theme of pumpkins continues throughout the whole film. The whole of the audience will know that pumpkins represent Halloween, which is about witches and ghosts. This reference also reminds the viewers that the genre is horror. The man inside the carriage is shown again, then an unnatural sound, the drawing and slashing of a sword, and the horses braying can be heard. The audience knows that it must be the Headless Horseman outside, but all that can actually be seen is the man inside the carriage that is starting to look very scared. The unnatural sound is a little like a horse, but it sounds more like a monster. When man then looks outside the carriage window, he sees the driver's head has been chopped off. Although the audience never saw this, they could predict that this would happen because of the sound effects that could be heard. ...read more.