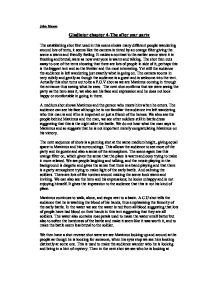 Gladiator chapter 4 -The after war party.

John Mason Gladiator chapter 4-The after war party The establishing shot first used in this scene shows many different people wandering around lots of tents, it seems like the camera is tinted by an orange filter giving the scene a warm and friendly feeling. It makes a contrast to the earlier scene were it is freezing and brutal, were as now everyone is warm and talking. The shot then cuts away to one of the tents showing that there are lots of people in side of it, perhaps this is the biggest tent and so the livelier and the most interesting. Yet still the audience the audience is left wandering just exactly what is going on. The camera zooms in very subtly and gently as though the audience is a guest and is welcome into the tent. Actually this shot turns out to be a P.O.V shot as we are Maximus coming in through the entrance thus seeing what he sees. The next shot confirms that we were seeing the party as the hero sees it, we also see his face and expression and he does not look happy or comfortable in going in there. A medium shot shows Maximus and the person who meets him when he enters. ...read more.

So the man first speaks to Maximus who replies to both the man and Quintus as he answers to the man who asked him the question but then turns to his friend Quintus as though these two have often discussed what will do when they leave the army, again reinforcing this view that they are close friends to the audience. Then there is a shot reverse shot between Maximus and Quintus, showing, again each other speaking and answering. A medium shot then shows the villain, Commodious, interrupting the conversation and immediately when Maximus realises who it is his smile fades telling the audience that perhaps this man is bad and Maximus does not like and therefore the audience think that because the hero does not like him then they won't either. He bows to the villain and the two Senators in respect A series of Shot reverse shots are used in this conversation showing each person talking to each other. The villain is dressed very richly as are the two Senators as well, compared to Maximus who is in his battle gear, showing how different they are from one another. Maximus does not look very much at the people showing that he isn't comfortable, or he doesn't like them or even that he isn't interested in the conversation. ...read more.

We hear the men speaking in the background, doing things, moving etc. And we also hear non-diegetic music playing in the background as well making it more peaceful and calming and emphasising Maximus' mood out here. The audience see him laughing, talking to the men thus emphasising how comfortable he is and how he likes these men better than those at the party. A special effect is also used heavily in this scene and that is the snow which is clearly computer generated as it does not settle on any one, this makes it seem much colder out there than at the party. We also see him brushing his horse and how relaxed he is out there where he is at home and peaceful. There is here a use of an eye line match where Maximus looks over at a scene we cannot see, then we see it from his p.o.v and see what he sees: which the villain is showing off in a clearing where all the men are topless and are fighting. There is a zoom and the camera focuses in on the men and showing the audience who they are thus quenching their curiosity. This scene is used to show that the villain wants to show off but he is a coward as he missed the war earlier, he has something to prove. ...read more.