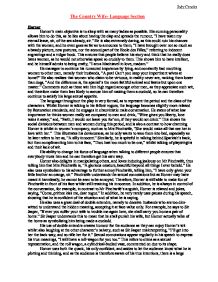 Horner's main objective in &quot;The Country Wife&quot; is to sleep with as many ladies as possible. His cunning personality allows him to do this, as he lies about having the clap and spreads the rumour, &quot;I have taken my eternal leave, sir, of the s*x already, sir

Horner Horner's main objective is to sleep with as many ladies as possible. His cunning personality allows him to do this, as he lies about having the clap and spreads the rumour, "I have taken my eternal leave, sir, of the s*x already, sir." He is also extremely daring, as this could ruin his chances with the women, and he even goes as far as to announce to them, "I have brought over not so much as a bawdy picture, new postures, nor the second part of the Ecole des Filles," referring to indecent engravings and a vulgar book. This ensures that people believe his story and think that he really does hates women, as he would not otherwise speak so crudely to them. This shows him to have intellect, and he himself admits to being crafty, "I am a Machiavel in love, madam." He manages to continue his rumoured impotence by lying, and constantly bad mouthing women to other men, namely their husbands, "A pox! Can't you keep your impertinent wives at home?" He also realises that women who claim to be virtuous, in reality never are, ranking them lower than dogs, "And the difference is, the spaniel's the more faithful animal and fawns but upon one master." ...read more.

His use of double entendre creates humour for the audience as they can enjoy Horner's wit whilst also laughing at the other character's naivety, such as Sir Jasper misinterpreting, "I'll get into her the back way, and so rifle her for it." s****l connotations appear regularly in his speech to express his true meanings, "I will have a roll-wagon for you too." This refers to china as a s****l representation, and the roll wagon, a cylindrical-bodied vase, commented on due to its shape. Horner uses both the quack, his only confidant, and asides to let the audience know what he is plotting and thinking, and as the audience is therefore aware of his true intentions, there is a large amount of dramatic irony in his comments. For instance, when he lies to Mr Pinchwife about making advances on his wife, "I'd never do't to a woman before her husband's face, sure," we know better and therefore his remarks amuse us. In addition, his use of asides, an anti-naturalistic device but useful means of commenting on present occurrences and their significance, lets the audience know of the true contents of Mrs Pinchwife's letter. ...read more.

The same effect is achieved by her repetition of words such as, "I won't," and she also uses many pauses in her sentences, "...Well, I will not send it...Ay, but then my husband will kill me..." This illustrates her lack of confidence and certainty in what she is saying and thinking, and that she is never one to be in control of a conversation. There are hints in the play that suggest Mrs Pinchwife will be potentially dishonourable later on in the play, "But I would have ventured for all that," in regards to men taking advantage of women at the theatre. Her education also improves as the play proceeds as she realises that she must keep things a secret from her husband in order to get what she wants, cunningly forcing him to let her seal the letter in order that he will not discover its true contents, "Lord, you think me so arrant a fool I cannot seal a letter?" By using asides when her husband is on stage, and speaking aloud when is off, Mrs Pinchwife enables to audience to know what she is thinking and understand her visual actions, "No, I must not give him that, so I had been served if I had given him this." ...read more.