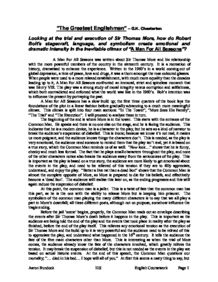 Looking at the trial and execution of Sir Thomas More, how do Robert Bolt's stagecraft, language, and symbolism create emotional and dramatic intensity in the inevitable climax of

"The Greatest Englishman" - G.K. Chesterton Looking at the trial and execution of Sir Thomas More, how do Robert Bolt's stagecraft, language, and symbolism create emotional and dramatic intensity in the inevitable climax of "A Man For All Seasons"? A Man For All Seasons was written about Sir Thomas More and his relationship with the more powerful members of the country in the sixteenth century. It is a recreation of history, dramatised to enhance the experience. Written in the 1960's in a world coming out of global depression, a time of peace, love and drugs, it was a thorn amongst the rose coloured glasses. When people were used to a more relaxed establishment, with much more equality than the decades leading up to it, A Man For All Seasons confronted an immoral, strict and spineless monarch that was Henry VIII. The play was a strong study of moral integrity versus corruption and selfishness, which both contradicted and enforced what the world was like in the 1960's. Bolt's intention was to influence the present by portraying the past. A Man for All Seasons has a slow build up; the first three quarters of the book lays the foundations of the plot in a linear fashion before gradually advancing to a much more meaningful climax. This climax is split into four main sections: "In The Tower", "More Sees His Family", "The Trial" and "The Execution". I will proceed to analyse these in turn. The beginning of the end is where More is in the tower. This starts with the entrance of the Common Man. He speaks and there is no one else on the stage, and he is facing the audience. This indicates that he is a modern device, he is a character in the play, but he acts as a kind of narrator to break the audience's suspension of disbelief. This is ironic; because we know it's not real, it makes us more poignant, and the audience knows things the characters don't. ...read more.

When he sees his family, his daughter curtseys, which shows that even though he has neglected them, she still respects him, which furthermore indicates that she has matured in this period. When audience see this, this shows them that if his daughter still respects him after he's neglected them, then they 'can' respect him. Bolt makes it obvious that More's family has suffered during this period: "...has aged and is poorly dressed". This again shows how much More has sacrificed, perhaps gambled, for his beliefs. Roper comments, "this is an awful place!" this re-establishes that More has had to put up with terrible conditions, which yet again tells the audience what a great man he was and what he was willing to give up. The word "awful" is quite ironic, it may mean that even though Roper appreciates it is a dreadful place; he wishes (has 'awe') that he was like More and could be so noble. More shows his modesty by saying, "it's not so bad..." which may mean that it isn't in relation to what he will achieve from it. This is followed by water imagery: "it drips... too near the river." This means that it is too near to people that aren't true to themselves and are corrupt. Even though More wants to se his family, he is initially confused about why they are there. Margaret has the stage direction "doesn't look at him". This indicates that she loves him very much, but she doesn't want him to know this, as she is annoyed with him neglecting them, and wants him to come out. Also, Alice has a bitter face, which shows that she feels the same way, and shows what time apart has done to their relationship. She believes that if she makes out she doesn't love him, he'll swear to the act, which is what his family want. Bolt has used stage directions well to help the audience see the underlying meaning in every sentence. ...read more.

More sees that this is worse for them than death is to him. More relieves the build up by telling everyone what he thinks of the whole situation. "God have mercy on your soul!" is highly ironic, as it's their souls that God should have mercy on, as they are dishonest and corrupt, whereas More is "pure" and true to himself. The trial is over. The first scene change is ironic: "The trappings of justice are flown upwards." This is Bolt showing that justice has not been done in a physical way. The gradual scene change, and the return of Margaret, creates more emotion in the scene. The meaning of More being 'dispassionate' to Margaret is so that she doesn't get too upset when he is beheaded. He feels that she shouldn't be there anyway. Also, the return of the woman again proves that More has not changed at all since the beginning of the play, but everyone has changed around him (like water surrounding him). "Envious" is used as a stage direction for Cranmer to reinforce that even Cranmer knows what is happening, and he is jealous of Sir Thomas More for being able to do what he is doing. The final ironies of Cromwell and Chapuys walking off together shows that they know what exactly has happened and understand it: "men who know what the world is and how to be comfortable in it." The curtain falls. Robert Bolt has left a very important message, through the dramatic exaggerations of this real event. Be true to yourselves, and no matter who challenges you, they can never win, as long as you know your self and don't deny it. More was a great man, and this play can only touch on how vast his greatness was, it can only tell us what he showed and not what he thought. This play can set a meaning for us to follow, the fact that we try to change our self for the wrong reasons, and A Man For All Seasons can help us put this right. Aaron Bundock 11S English Coursework Page 1 ...read more.